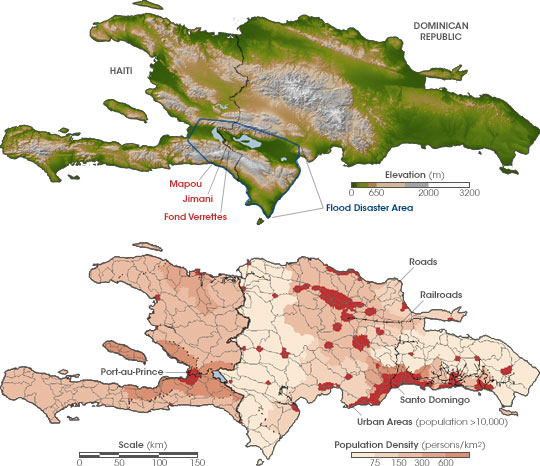 The skies over Hispaniola opened up on May 24, 2004, and poured as much as 10 inches (25 cm) of rain within a 24-hour span onto an already rain-soaked island that had received as much as 10 inches of rain over the previous week. The torrent triggered flooding and mudslides that ran swiftly down the northern and southern flanks of the Massif de la Salle, straddling the border between Haiti and the Dominican Republic. As the deluge fanned out on the flood plains below, several villages were overrun by water, mud, and debris. Tragically, more than 2,000 people lost their lives.

The maps above compare the topography of Hispaniola (top) with the island’s population density (bottom). Much of the town of Jimani, Dominican Republic, was overrun by gravel and debris swept off the Massif de la Salle by rapid rainwater runoff. Across the border in Haiti, the village of Mapou was completely inundated so that it now sits at the bottom of a newly formed lake.

Even as emergency aid workers were rushing to bring assistance to the people impacted by the devastation, NASA researchers were analyzing satellite remote sensing data to assess what caused the disaster and to map the extent of the damage. A key factor in the intensity of the destruction is the extensive deforestation within the associated drainage basins, and the presence of human settlements within floodplains of rivers and other low-lying areas around the Massif de la Salle.

The images show the city of Barahona and its surroundings in the southwestern Dominican Republic. The most obvious difference between the two images is the flooding around the Laguna del Rincón.