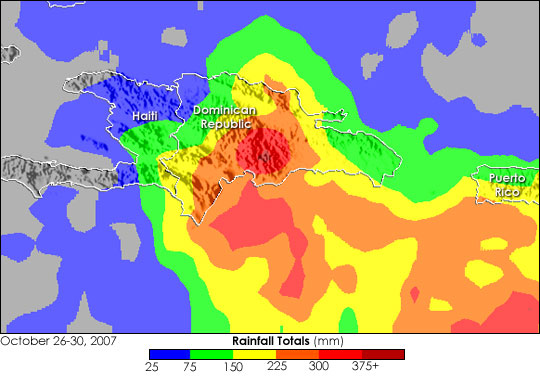 After forming just south of Hispaniola on October 28, 2007, Tropical Storm Noel made landfall on the Haitian side of the island on October 29 with sustained winds reported at 80 kilometers per hour (50 miles per hour or 45 knots). Even before making landfall, Noel began to soak the island with heavy downpours. Despite the center of circulation passing over Haiti on the western side of Hispaniola, the Dominican Republic, located on the eastern side of the island, felt the brunt of the rain. The storm’s asymmetric structure with most of the rain occurring east of the center as well as southerly winds wrapping around the right side of the storm combined to bring the heaviest rain to the Dominican Republic.

This image shows rainfall totals over Haiti and the Dominican Republic between October 26 and October 30, 2007, according to the near-real time, Multi-satellite Precipitation Analysis at Goddard Space Flight Center. The analysis is based in part on data from the Tropical Rainfall Measuring Mission (TRMM) satellite. The highest rainfall totals (shown in the darkest red) are over the south-central Dominican Republic and are on the order of 400 millimeters (about 16 inches). Most of the east side of Hispaniola received at least 150 millimeters (about 6 inches) of rain (shown in yellow). Rainfall totals over Haiti were much less, but still significant, ranging from about 1 to 6 inches (shown by the blue and green areas). As of October 30, 25 people had been reported dead with many more still missing, reported CNN. After passing Haiti, Noel curved westward over Cuba. The storm was expected to turn northeastward and parallel the Eastern Seaboard.

TRMM, launched in 1997 to observe rainfall over the Tropics, is a joint mission between NASA and the Japanese space agency, JAXA.