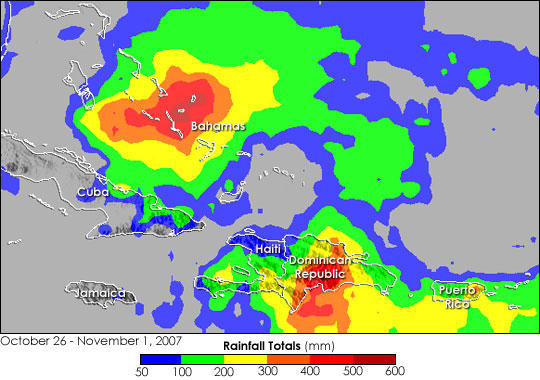 Though not the most powerful storm of the 2007 Atlantic Hurricane season, Tropical Storm Noel was among the most deadly. Only Category 5 Hurricane Felix and its associated flooding had a higher toll. The slow-moving Tropical Storm Noel inundated the Dominican Republic, Haiti, Jamaica, Cuba, and the Bahamas with heavy rain between October 28 and November 1, 2007. The resulting floods and mudslides left at least 115 dead and thousands homeless throughout the Caribbean, reported the Associated Press on November 2, 2007. The president of the Dominican Republic, the worst-hit nation, declared a state of emergency. After crossing Hispaniola, the island shared by the Dominican Republic and Haiti, Noel moved over northern Cuba and then tracked northeast over the Bahamas. The storm was expected to strengthen into a Category 1 hurricane, move quickly north along the east coast of the United States, and strike Nova Scotia, Canada, as an extra-tropical storm on November 4, said the National Hurricane Center.

This image shows the distribution of the rainfall that made Noel a deadly storm. The image shows rainfall totals as measured by the Multi-satellite Precipitation Analysis (MPA) at NASA Goddard Space Flight Center from October 26 through November 1, 2007. The analysis is based on measurements taken by the Tropical Rainfall Measuring Mission (TRMM) satellite. The heaviest rainfall fell in the Dominican Republic and the Bahamas, northeast of Noel’s center. Areas of dark red show that rainfall totals over the south-central Dominican Republic and parts of the Bahamas were over 551 millimeters (21 inches). Much of eastern Hispaniola, including both the Dominican Republic and Haiti received at least 200 mm (about 8 inches) of rain, shown in yellow. Rainfall totals over Haiti and Cuba were less, with a range of at least 50 mm (2 inches) to over 200 mm (8 inches).

TRMM, launched in 1997 to observe rainfall over the Tropics with a combination of passive microwave and active radar sensors, is a joint mission between NASA and the Japanese space agency, JAXA.