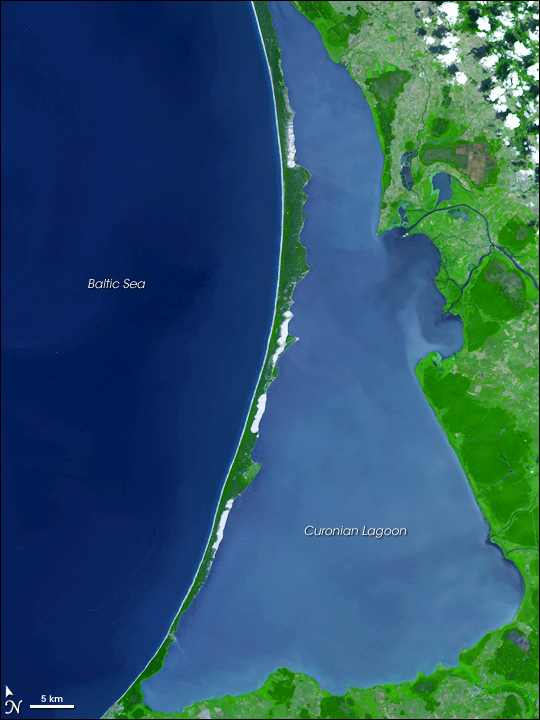 In the southeastern corner of the Baltic Sea lies a skinny stretch of land. Known as the Curonian (or Courland) Spit, it separates the Curonian Lagoon (also known as the Courland Lagoon) from the Baltic Sea. Just 3,800 meters (about 12,460 feet) at its widest point, the spit encloses a lagoon of some 1,620 square kilometers (625 square miles). On July 25, 2006, the Advanced Spaceborne Thermal Emission and Reflection Radiometer (ASTER), flying on NASA’s Terra satellite, captured this image of the spit, the lagoon it encloses, and part of the Baltic Sea.

In this image, dark blue indicates deep water, and lighter blue indicates shallow and/or sediment-laden water. Different shades of blue distinguish the deeper Baltic Sea and the shallower Curonian Lagoon. Vegetation appears in varying shades of green, paved surfaces and bare ground appear in shades of beige and gray, and sandy areas appear off-white. Obvious sandy areas appear along the length of the spit. On the Baltic Sea side, a thin off-white band of beach runs the length of the spit; on the Curonian Lagoon side, intermittent beaches carve their way into the narrow strip of land.

Both the spit and the lagoon fall within the borders of Lithuania in the north and Kaliningrad Oblast (a possession of the Russian Federation) in the south. The lagoon is fed primarily by the Nemunas (or Neman) River, and the river delta appears on the right side of this image, near the top. Between its sandy beaches, pine forests, and attractive views, the area is a popular tourist destination. Yet the area is fragile. Natural forces of winds and tides constantly threaten the spit, and human efforts of stabilization and reforestation are needed to preserve it. The United Nations Educational, Scientific and Cultural Organization designated the Curonian Spit as a World Heritage site in 2000, after receiving a joint nomination from Lithuania and the Russian Federation.