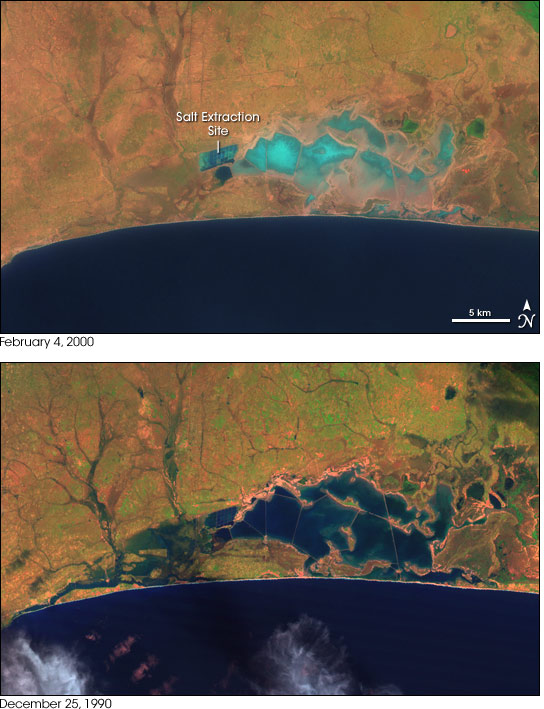 Ghana’s Songor Lagoon is a shallow, brackish-water lagoon located just to the west of the Volta River where it empties into the Atlantic Ocean on West Africa’s Gold Coast. The area contains diverse landforms and ecological niches, including mudflats, islands, open water, small streams, sandy beaches, and salt pans. The lagoon is an important stopping-over point for migratory and other birds. It is also home to several species of endangered or threatened sea turtles.

These two images of Songor Lagoon from NASA’s Landsat satellites show changes to the area over the past decade. The top image shows the lagoon as it appeared in February 2000, while the bottom image shows the lagoon in December 1990. The deep blue, open-water area is dramatically reduced in the more recent scene, with large areas of bare ground exposed. Although some of these changes may reflect seasonal or year-to-year variability in rainfall (notice that the landscape to the north is less lush and green in the February image than the December image), an analysis of the lagoon by the United Nations Environment Programme (UNEP) indicates that a more permanent and significant decline in surface area has affected the region. The two main culprits appear to be salt extraction in the western end of the lagoon and diversion of feeder streams for irrigation.

Songor Lagoon is one of dozens of lakes studied by UNEP for its report Africa’s Lakes: An Atlas of Environmental Change. The atlas is a compilation of ground-based photographs and current and historical satellite imagery detailing changes in Africa’s lakes in recent decades. UNEP undertook the project to highlight the importance of sustainable use of lakes and other water resources in the United Nations’ efforts to combat poverty and famine in Africa.