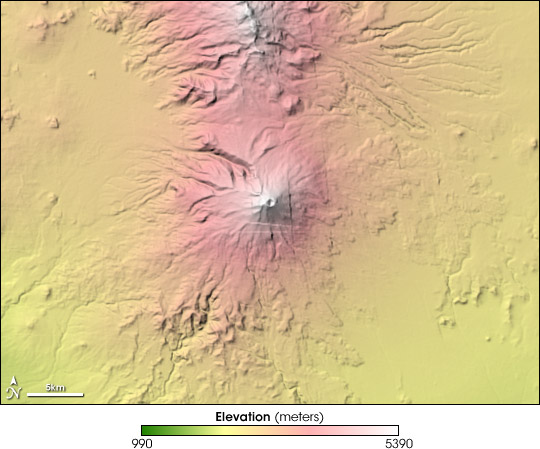 Mexico’s Popocatépetl Volcano ushered in the new month with a moderate eruption on the morning of December 1, 2005. According to reports from the local monitoring station, an ash plume rose 5 kilometers above the summit and spread east-northeast, scattering a light ash fall onto nearby towns and cities. Several hours later a smaller ash column rose 2.5 kilometers above the volcano’s summit. As of December 1, 2005, scientists at the monitoring station had placed the volcanic alert level to yellow—indicating that those nearby should be aware that the volcano is active, should make basic emergency preparedness arrangements, and should remain alert for reports from authorities—but they were not anticipating a major eruption in coming days.

This image shows the topography of the Popocatépetl Volcano and the surrounding landscape in colors ranging from green (low elevation) to yellow to pink to white (highest elevation). Popocatépetl is a stratovolcano, the classic symmetrical (in this case cone-shaped) mountain with a circular crater in its summit. The volcano sits in the center of the image, its slopes rising from the surrounding plain. To the east, scallop-edged raised areas show the location of hardened lava flows.

According to the Smithsonian Institution's Global Volcanism Website, “At least three previous major cones [at Popocatépetl] were destroyed by gravitational failure during the Pleistocene, producing massive debris-avalanche deposits south of the volcano.” That history may explain why the southern portion of the volcano and the terrain to the south appear much more rugged than the area to the west and the east. North of Popocatépetl is a peak known as Iztaccihuatl, a 900,000-year-old volcano whose last eurptive episode was 80,000 years ago. The topographic map is made from data collected by the Space Shuttle Endeavour in February 2000 as part of the Shuttle Radar Topography Mission (SRTM).

The volcano is just an hour southeast of Mexico City, and it has a history of mild to moderate eruptions throughout the recorded history of the Aztecs and the Spanish. It had been dormant for many decades until an eruption in December 1996 opened a new chapter in the volcano’s eruptive history.