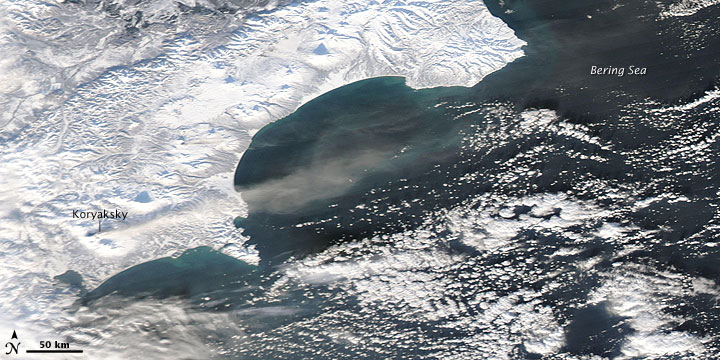 Koryaksky (or Koryakski) Volcano on Russia’s Kamchatka Peninsula released a plume of ash and/or steam in late December 2008. The Moderate Resolution Imaging Spectroradiometer (MODIS) on NASA’s Aqua satellite captured this image on December 25, 2008. In this image, the off-white plume blows away from the volcano summit toward the east-northeast over the Bering Sea. Barely darker than the snow, the plume casts a bluish shadow on the land surface below.

According to a news report from the BBC, the volcano sent ash to a height of 6,000 meters (20,000 feet). The U.S. Air Force Weather Agency reported continuous ash and steam emissions from the volcano on December 25, the same day this picture was taken.

Koryaksky is a stratovolcano composed of alternating layers of hardened lava, solidified ash, and rocks ejected by previous eruptions. With a summit at 3,456 meters (11,338 feet) above sea level, the volcano looms above Petropavlovsk, Kamchatka’s largest city. Although the volcano’s last major eruption occurred some 3,500 years ago, it did erupt during recorded history, including a lava flow in 1895.

On January 27, 2009, the Klyuchevskaya Volcano on the Kamchatka Peninsula released a continuous plume of ash and steam.