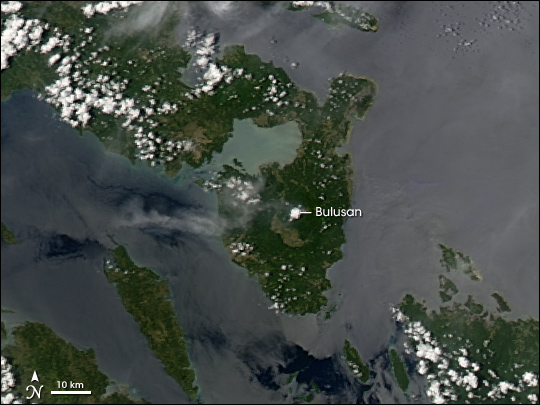 A light plume of ash rose from the Bulusan Volcano in the Philippines on April 29, 2006. The Moderate Resolution Imaging Spectroradiometer (MODIS) on NASA’s Terra satellite captured this image of the volcano at 12:50 p.m. (4:50 UTC) local time, shortly after the ash eruption. A faint white plume snakes westward from the cloud-capped mountain in the center of the image. According to the Associated Press, the plume rose 1.5 kilometers (about 1 mile) from the volcano. The ash eruption did not cause any damage, but authorities asked people to avoid the region near the crater.

Located about 390 kilometers (244 miles) southeast of Manila, Bulusan is the southernmost volcano on Luzon Island. Many moderate eruptions have been recorded at the 1,565-meter-high volcano since the mid-nineteenth century. For a complete history of the volcano, please visit the Smithsonian’s Global Volcanism Program Website.