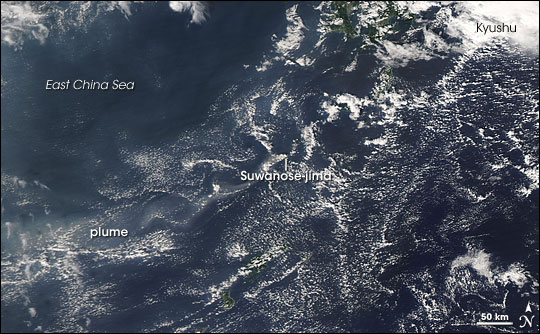 The Suwanose-jima Volcano, part of Japan’s Ryukyu Islands in the East China Sea, released a continuous plume of ash and steam in late October 2008. The Moderate Resolution Imaging Spectroradiometer (MODIS) on NASA’s Aqua satellite captured this image of the region on October 19, 2008. In this image, the plume forms a rippling pattern as it blows away from the volcano toward the west-southwest. The plume differs from the nearby clouds in both its slightly darker color and more diffuse shape. Near the volcano summit, the plume appears beige, hinting at its ash content.

Suwanose-jima is a stratovolcano composed of alternating layers of hardened lava, solidified ash, and rocks ejected by previous eruptions. The 8-kilometer- (5-mile-) long island has two summit craters that have been active in historical times, and the volcano is one of Japan’s most frequently active.

Clouds obscure the summit of Dukono in this image from May 3, 2009, but a faint plume blows away from the volcano toward the east-northeast.