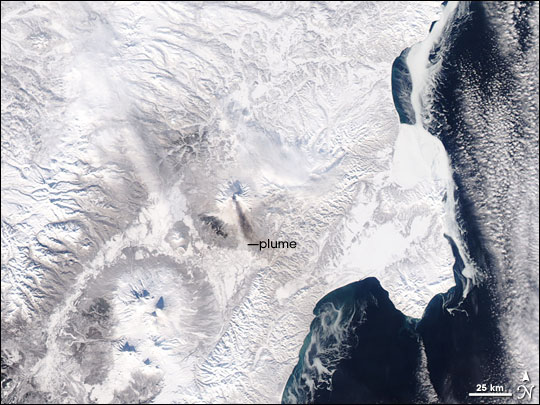 On February 16, 2007, the Sheveluch Volcano released a plume. The Moderate Resolution Imaging Spectroradiometer (MODIS) flying onboard NASA’s Aqua satellite took this picture the same day. In this image, the plume blows toward the south, moving in the same direction as clouds to the west. The plume appears to be composed of both steam and volcanic ash, as indicated by its dual-color shades of white and brown.

Ash and Steam from Sarychev Peak

A true-color MODIS image shows water vapor and volcanic ash erupting from Sarychev Peak and forming a counter-clockwise arc over the Sea of Okhotsk on June 16, 2009.