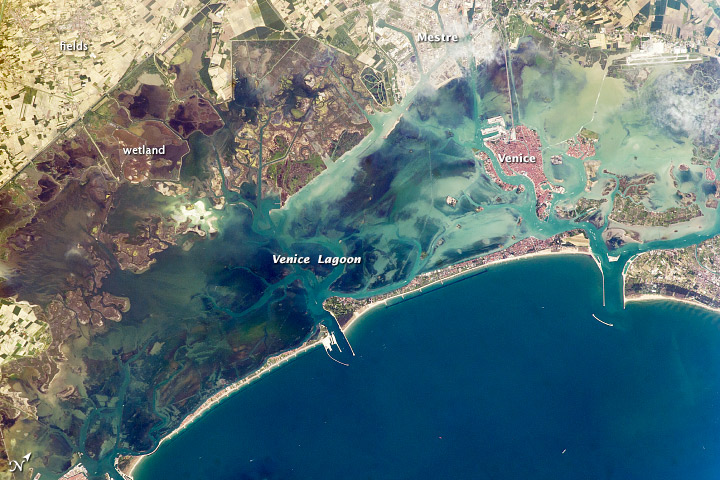 A narrow barrier island protects the Lagoon of Venice from storm waves in the northern Adriatic Sea, and breakwaters protect inlets to the lagoon. Red tiles on the roofs of Venice contrast with the grays of the sister city of Mestre, and the cities are joined by a prominent causeway. What appears to another causeway joining the island to the airport (top right) is actually the combined wakes of many boats and water taxis shuttling between them. Small, bright agricultural fields on well-drained soils (top left) contrast with the darker vegetation of back-bay swamps, where fishing is a popular pastime.

The water is turbid in the northern half of the lagoon, the result of heavy use by watercraft and of dense urban populations on the shores. This turbidity and other issues of environmental concern led to the creation in 2002 of the Atlas of the Lagoon (Atlante della laguna), which was set up to document environmental conditions and to track changes. Today, the Atlante della laguna is available online (in Italian) and provides a comprehensive collection of interpretive maps and imagery—including astronaut photographs from the International Space Station. A detailed view of Venice in 2007 can be viewed here. A more detailed article on the use of astronaut photography to monitor environmental change in the Lagoon of Venice is available here.

Astronaut photograph ISS039-E-19482 was acquired on May 9, 2014, with a Nikon D3S digital camera using a 400 millimeter lens, and is provided by the ISS Crew Earth Observations Facility and the Earth Science and Remote Sensing Unit, Johnson Space Center. The image was taken by the Expedition 39 crew. It has been cropped and enhanced to improve contrast, and lens artifacts have been removed. The International Space Station Program supports the laboratory as part of the ISS National Lab to help astronauts take pictures of Earth that will be of the greatest value to scientists and the public, and to make those images freely available on the Internet. Additional images taken by astronauts and cosmonauts can be viewed at the NASA/JSC Gateway to Astronaut Photography of Earth. Caption by M. Justin Wilkinson, Jacobs at NASA-JSC.