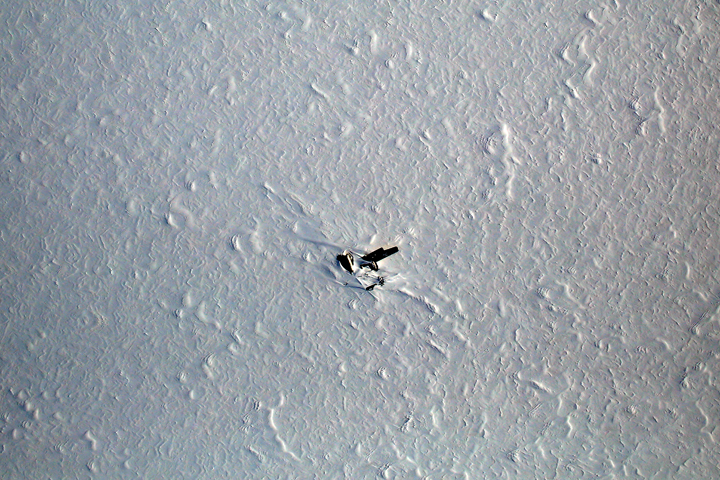 Flying over the polar regions can be both awesome and tedious, beautiful and boring. It's a frontier that few eyes have seen, but the utter whiteness of the snow and ice can start to blend into a sameness that becomes disorienting. Landmarks become welcome signs, even when that landmark is a somber reminder of flights gone wrong.

The image above shows the Kee Bird, a wrecked B-29 Superfortress that made an emergency landing on a northwest Greenland ice sheet in 1947. The image was acquired on May 1, 2014, by the Digital Mapping System (DMS), an instrument attached to NASA’s P-3 Orion airplane for the Operation IceBridge campaign.

The Kee Bird was a U.S. Air Force plane that made a crash landing after running into foul weather and other issues during a reconnaissance flight to the North Pole. The entire crew survived the crash, but then had to wait for more than three days to be found and rescued. In the 1990s, a private group of airplane and history aficionados attempted to restore and fly the plane, only to have it catch fire in the process. The wreck still lays on the ice sheet and is slowly being covered by wind-blown snow and ice.

Since 2009, Operation IceBridge has made annual campaigns to the Arctic and Antarctic to monitor glaciers, ice sheets, and sea ice. The 2014 northern spring campaign ended on May 23 after eleven weeks of flights.

“The plane wreck lies right in between two of major science targets—Humboldt and Petermann Glaciers—and because of that we fly almost directly over it nearly every year,” said John Sonntag, a researcher from NASA’s Wallops Flight Facility who has collected Kee Bird photos since the early 1990s. “When you spend eight hours a day, five days a week staring at a blinding white ice sheet, something interesting to look at comes as a rather welcome sight.” 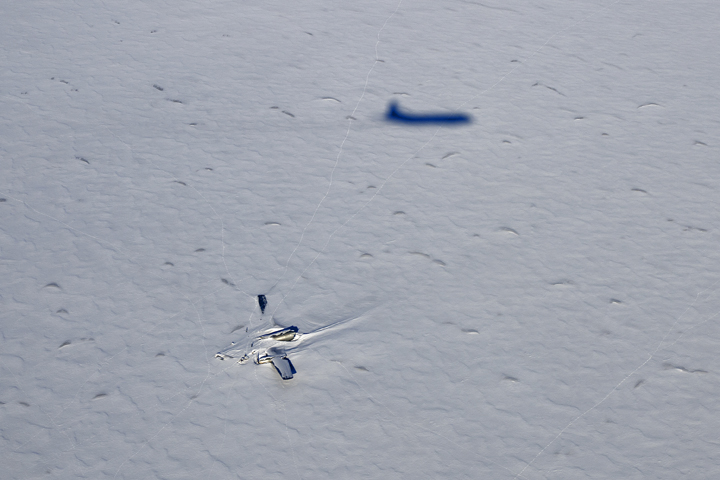 Michael Studinger, the NASA scientist who leads IceBridge, shot the second photo in the spring of 2013. In the oblique view, you can see the shadow of the P-3 research plane. Faint thin lines across the ice are likely polar bear tracks.