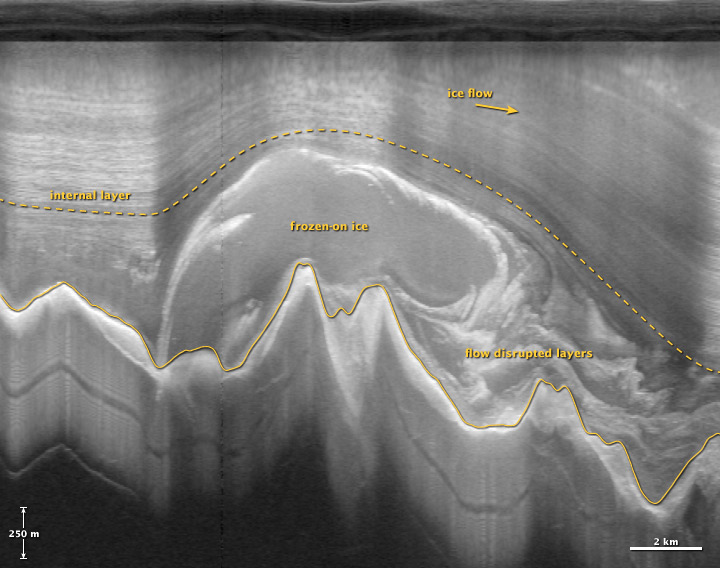 Upending the idea that all ice sheets grow from the accumulation of snow at the top, researchers working in Antarctica have found evidence of large-scale ice-making at the bottom of that continent's massive ice sheets. The surprise finding could change scientists’ understanding of how glaciers rise, fall, and move horizontally across the landscape.

An international research team flew multiple Twin Otter airplane passes over East Antarctica’s Gamburtsev Mountains from November 2008 through January 2009. Equipped with ice-penetrating radar, magnetometers, laser ranging systems, and gravity meters, scientists mapped the topography of the ice surface and of the buried mountain range at the bottom of the ice sheet. The project was funded by the U.S. National Science Foundation and other international institutions as part of the International Polar Year.

The image above shows a radar profile of the ice as recorded on January 1, 2009, on the south side of Dome A in the Gamburtsevs. The base of the image reveals the rugged land beneath the ice, while the upper edge shows the flat, annual layering typical of ice formation from the top. In between, there is a jumbled mess unlike anything researchers had seen before.

When the science team first examined their radar profiles in real time, they thought there was a mistake, a glitch in the instrument or data. Perhaps the science team was just too tired from the long, cold flights. But further analysis confirmed what they were seeing.

“We usually think of ice sheets like cakes—one layer at a time, added from the top,” said Robin Bell, a geophysicist at Columbia University's Lamont-Doherty Earth Observatory. “This is like someone injected a layer of frosting at the bottom—a really thick layer.”

Beneath Dome A, a plateau that forms the high point of the East Antarctic ice sheet, at least 24 percent of the ice formed from the bottom up. In other places, as much as half of the ice sheet is made up of this bottom-forming ice.

Researchers believe friction between the ice and land surface, as well as natural heat radiating from the solid earth, can melt significant amounts of water on the underside of an ice sheet. Several years ago, scientists found large lakes underneath the Antarctic ice that were likely formed by such processes. The liquid water is insulated from the extreme cold of the surface air by the ice sheet; the extreme pressure from the overlying ice can also make it harder for water to freeze.

The movement of the ice sheet and the natural flow of water over the landscape can then move some of that water to areas where there is less ice above—meaning less pressure and less insulation. Sometimes the water is squeezed up valley walls. Either way, the result is a quick re-freezing that makes the unusual ice formations shown above. The creation of this bottom ice can deform the shape of the entire ice sheet above.

“Water has always been known to be important to ice sheet dynamics, but mostly as a lubricant,” Bell added. “As ice sheets change, we want to predict how they will change. Our results show that models must include water beneath.”