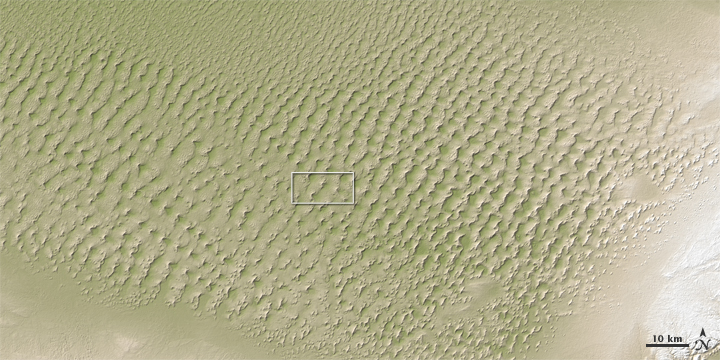 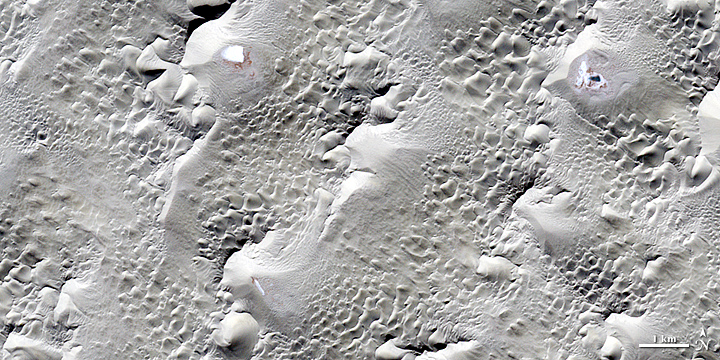 Spread sand on an even surface so that the layer is perfectly flat. You might think that gravity should keep the layer even. But even a flat layer of sand is unstable because grain sizes differ and respond differently to the same breeze. A light wind can form ripples on a sand surface in just minutes. Over years, centuries, and millennia, winds can sculpt sand into incredibly complex shapes.

Some of our planet’s most elaborate sand dunes are found in the Badain Jaran Desert, in the western part of Inner Mongolia. Researchers have long puzzled over how to best study these dunes, but mapping them in three dimensions has become much easier, thanks to a NASA satellite. The images shown here offer two views of the Badain Jaran Desert as observed by the Advanced Spaceborne Thermal Emission and Reflection Radiometer (ASTER) on NASA’s Terra satellite.

The top image is an elevation map made from the ASTER Global Digital Elevation Model (GDEM), released in 2009. The image shows dune peaks in off-white, and the low-lying areas between dunes in green. The white rectangle indicates the area shown in the bottom image, which was acquired on December 13, 2007, and made from a combination of visible and near-infrared (VNIR) light.

Dunes and small lakes mingle in the Badain Jaran, with the lakes occurring in flat areas between dunes. (A few lakes appear in the VNIR image; the lake near the upper right corner of the image is tinged with blue.) In the VNIR image, sunlight illuminates south-facing dune surfaces while leaving north-facing surfaces in shadow. The dunes are incredibly complicated—described in a 2009 study as “complex reversing mega-dunes developed from compound barchanoid mega-dunes.”

A barchan dune is crescent shaped, with “horns” pointing in the same direction as the wind blows. Barchan dunes tend to form in areas with steady wind direction and limited amounts of sand. Where more sand is available, and where wind direction is more variable, more complicated dunes can form. Reversing dunes often occur in areas where winds blow from opposite directions. The prevailing wind creates barchanoid dunes, and occasional winds from the opposite direction produce small dunes on the crests of the big dunes. Compound dunes are made from multiple dunes of the same type that overlap or overlie each other. Complex dunes are made from different types of dunes merging or overlapping.

By offering three-dimensional data, the ASTER GDEM has enabled researchers to better understand the formation of complicated dunes. Besides the Badain Jaran, the GDEM has also shed light on the formation of dunes in the Empty Quarter (Rub’ al Khali) of Saudi Arabia.

Because of the angle of sunlight, the bottom (gray scale) image may cause an optical illusion known as relief inversion.