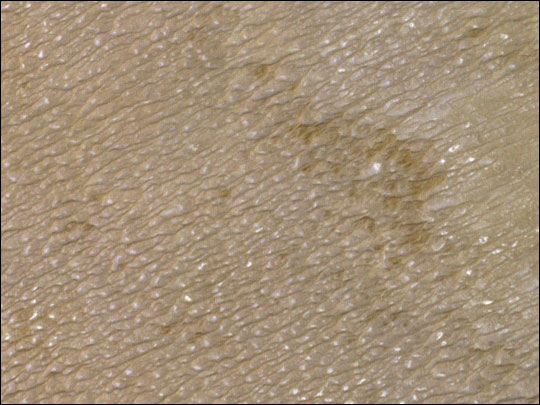 In southern Afghanistan, shifting sand dunes flow across the huge, sandy desert known as the Registan. When the winds constantly blow from the same direction over relatively flat terrain with a small to moderate amount of sand, the sand will pile up in crescent-moon shaped dunes, whose thin tips point in the direction of the wind flow. Called barchan dunes, these dunes will migrate across the desert surface as sand grains on the crest of the dune are toppled by the wind and spill down the leeward face of the mound. As the pile of sand on the leeward side (the side protected from the wind) gets larger, gravity eventually topples the growing pile, moving the dune’s leading edge slowly forward. Large barchan dunes, such as those found in White Sands National Monument in New Mexico, often migrate between 8 and 15 feet each year.

This Advanced Spaceborne Thermal Emission and Reflection Radiometer (ASTER) image captured on August 20, 2000, shows an area of barchan dunes in the northern Registan Desert, just south of the Afghan city of Kandahar. Many of the dunes retain a near-perfect crescent shape, with the bowl of the crescent on the left and the tips on the right. This orientation reveals that the predominant winds in the area blow from the west-southwest.