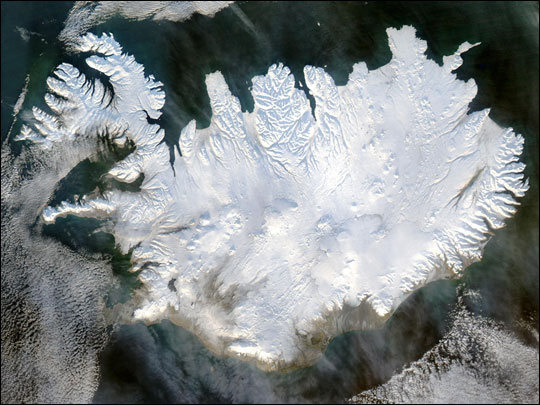 True to its name, Iceland is shown here covered in a white blanket of ice and snow. Low layers of clouds float over the Greenland Sea (left) and the Atlantic Ocean (bottom). Iceland’s southern, low-lying coastlines are greyish-tan, while the rest of the island remains pristine white.

The uniform color hides the exact boundaries of Iceland’s four permanent ice caps—Langjokull and Hofsjokull in the interior west, Myrdalsjokull on the southern coast, and Vatnajokull on the eastern coast. The ice caps have a smooth, rounded appearance that contrasts with the snow-covered interior plateau of the island as well as with the rugged, glacier-carved coastlines. Vatnajokull is the largest of the four, and it rests on top of three active volcanoes. The heat from these volcanoes causes the underside of the ice cap to melt, slowly building up meltwater in the volcano’s caldera. When the meltwater spills over the lip of the caldera, it releases a torrent of water known as a glacial melt flood.

Iceland sits just south of the edge of the Arctic Circle at the intersection of two tectonic plates, which accounts for its volcanic activity. Located on a mid-ocean ridge between the North American and the Eurasian tectonic plates, Iceland is being slowly pulled in two as the two plates spread apart. As the plates retreat, magma from deep in the Earth wells up to the surface. Much of the interior portion of the island is covered in lava fields.

The harsh climate that might be expected based on the island’s closeness to the Arctic Circle is softened by the tail end of the Gulf Stream Current, which flows up through the Atlantic Ocean bringing heat from the tropics. Unlike its eastern neighbor Greenland, large portions of Iceland shake off their wintry cover each year. But between the lava fields, cold deserts, and the tundra that dominates the northern parts of the island, only about 20-25 percent of the island is habitable, mostly along the south and eastern coasts.

This true-color image was acquired on January 28, 2004, by the Moderate Resolution Imaging Spectroradiometer (MODIS) on the Aqua satellite.