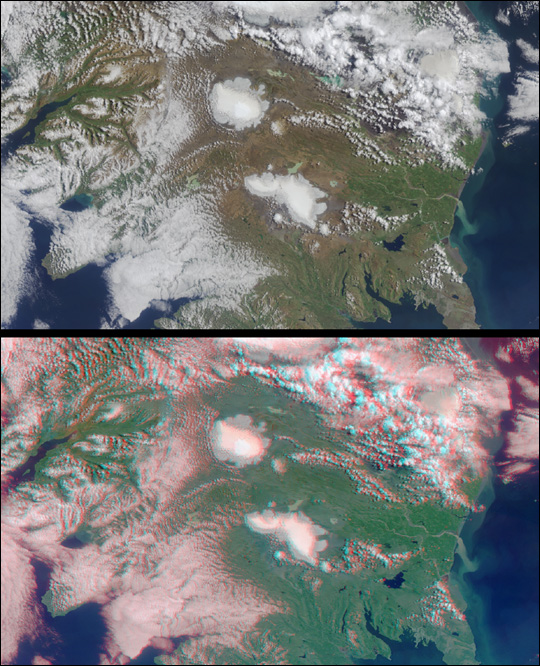 Due to an unusual combination of tectonic settings, many icecaps and glaciers of Iceland rest above active volcanoes. This island nation is located on the northern edge of the Mid-Atlantic ridge, at the intersection of the North American and Eurasian plates, and is one of the few places on Earth where a mid-ocean ridge is exposed above sea level. The land is built from erupted and intruded magmas concentrated around a hot spot beneath the spreading ridge.

These late summer views of central and southwestern Iceland were obtained by the Multi-angle Imaging SpectroRadiometer on August 16, 2001, during Terra orbit 8842. The upper image is a true-color view from the instrument's vertical-viewing (nadir) camera. The lower image is a stereo anaglyph generated from the instrument's nadir and 60-degree forward-viewing cameras. Viewing the anaglyph in 3-D requires the use of red/blue glasses with the red filter placed over your left eye. The images have been oriented with north at the left in order to facilitate stereo viewing. Information on ordering glasses is available at http://photojournal.jpl.nasa.gov/Help/VendorList.html#Glasses.

Each image represents an area of about 200 by 340 kilometers. Two of Iceland's larger icecaps, Langjökull (located just below image center) and Hofsjökull (just above center) can be clearly seen. The western edge of Vatnajökull is also visible at the top of the image, and a portion of Myrdalsjökull can be seen through the clouds in the upper right.

Langjökull (the Long Glacier; 1287 meters maximum elevation) is the second largest icecap in Iceland. It supplies water to Lake Pingvallavatn, the largest lake in the country (visible in the lower right), and to several other lakes and geothermal areas. Hofsjökull (the Temple Glacier; 1760 meters) is the third largest icecap in Iceland. The landscape under the ice is the great mountain massif of a central subglacial volcano. The brighter, rounded area atop the icecap is a vast, ice filled caldera. The Pjorsa, Iceland's longest and largest river, is fed by the Hofsjökull icecap. The river can be seen running adjacent to the icecap toward the Atlantic Ocean at image right. Iceland has a very vigorous climate, and the high-energy coastline and glacial meltwaters result in the movement of a large amount of sediment to the sea, visible here in the turbid waters of the Pjorsa.

The capital city of Reykjavik is visible in the lower right as a greyish region along the coast, to the west of (below) a bank of cumulus clouds. Reykjavik is located about 20 kilometers west of the Reykjanes-Langjökull volcanic zone, and the name of the city, the “Bay of Smokes,” is testimony to the region's geothermal activity. 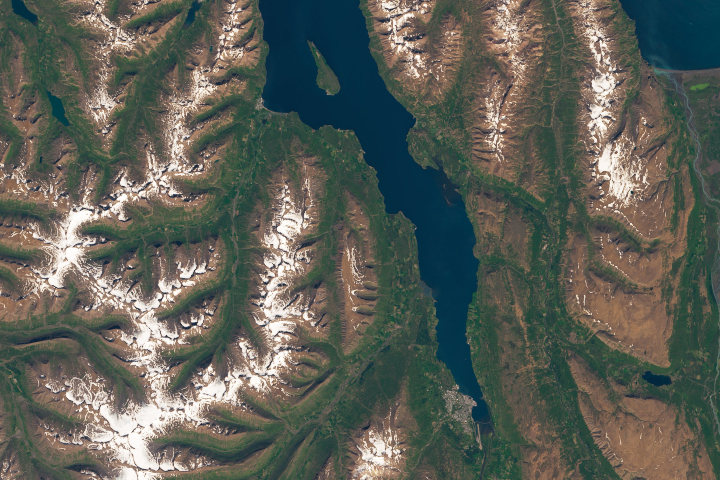 Eyjafjörður is a prime destination for whales, scientists, and tourists.