volcanic eruptions and earthquakes, but the same geothermal activity meets the inhabitants&rsquoe energy needs by providing them with hot-water-powered home heating."> 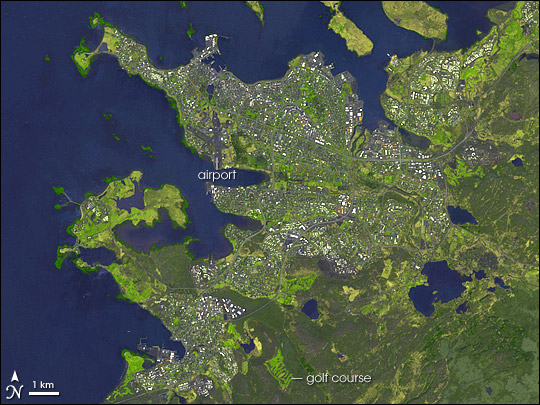 On May 11, 2002, the Advanced Spaceborne Thermal Emission and Reflection Radiometer (ASTER) sensor on NASA’s Terra satellite captured this image of Reykjavik and its surroundings. Resting on a peninsula, the capital city stands out from the nearby landscape thanks to its straight lines, sharp angles, and mostly gray hues. Outside of the city, vegetation appears in various shades of green. As Iceland is geologically young and its climate is cold, sizable plants are rare. Less than one-fourth of Iceland’s land surface has continuous plant cover, and the plants consist mostly of low-growing shrubs. Little of Iceland’s land surface is cultivated, but such areas appear in bright green in and around Reykjavik. A clear example of cultivated land is the meandering, wormlike area south of the city—a golf course.

Lakes of varying sizes dot this coastal area, matching the blue of the nearby ocean. One color missing from this shot is white. Although some snow remained in the nearby mountains in May 2002 (visible in the high-resolution image), not much snow lingered on the land around the capital city. Iceland’s location near the Gulf Stream gives it a milder climate than its name implies.