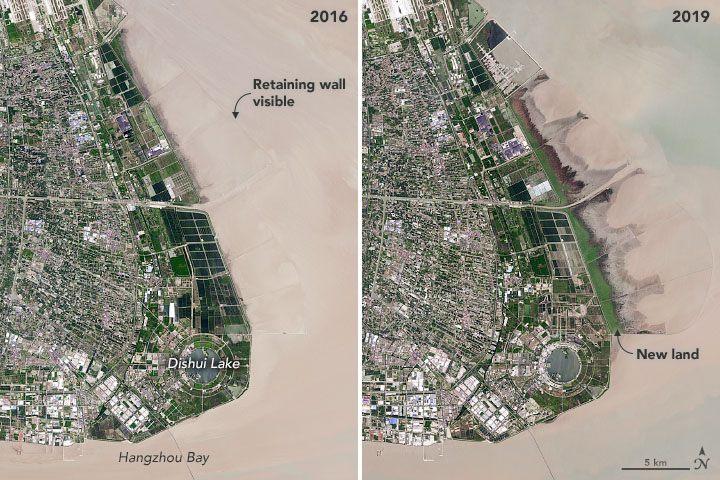 The Chinese metropolitan area of Shanghai has ranked high on lists of economic and population growth in recent decades. So it is hardly surprising that the city of 24 million people stands out in another way: the amount of new land that people have created, or “reclaimed.”

While reclaimed land is typically used for ports, industry, and housing, Shanghai stands out for devoting some of its new land to parks, forests, and wetlands. That tendency is visible in this pair of images from 2016 and 2019, acquired by the Operational Land Imager (OLI) on Landsat 8. Nanhui is a newly-built city in Pudong on Hangzhou Bay, about 60 kilometers (40 miles) from downtown Shanghai.

One of the most striking features is Dishui Lake, a circular freshwater lake that engineers constructed between 2003 and 2005 from sediment deposited by the Yangtze River. Within a few years, landscapers planted various shrubs, trees, and other vegetation in the surrounding Green Ring Park—plantings that were designed to improve the fertility of the soil and establish woodlands.

Since 2016, the vegetation in these parklands has grown thicker. Meanwhile, new patches of green—coastal marshes—have emerged just to the north of the lake on newly reclaimed coastal land. With a combination of marshland, rice paddy, and aquaculture ponds, these areas have become a haven for migratory birds that travel from Australia to Siberia—as well as birdwatchers who follow them.

With the new land comes questions about how to best use it. Some birdwatchers and environmental groups want to keep the new land as marshland, and they have aired concerns about government plans to plant trees, which would make it less hospitable to some types of birds. However, government planners say they need to continue planting trees to meet city-wide standards for forest cover, and they have designated parts of nearby Chongming Island for bird breeding grounds, according to reporting from Caixin.

Read more about the urbanization of Shanghai in World of Change: Sprawling Shanghai. 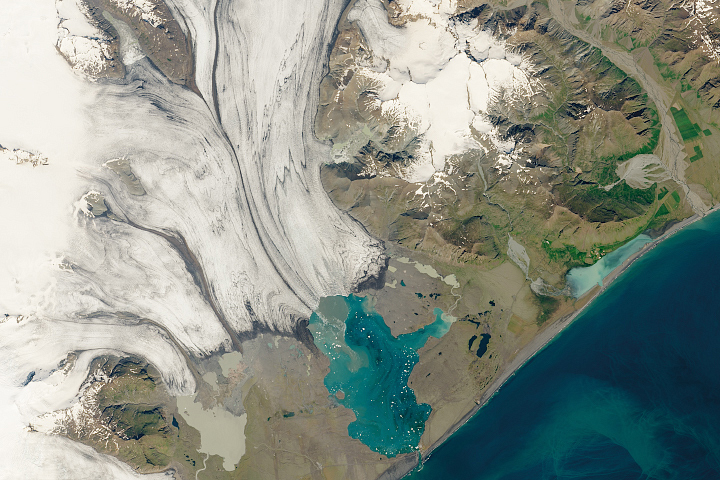