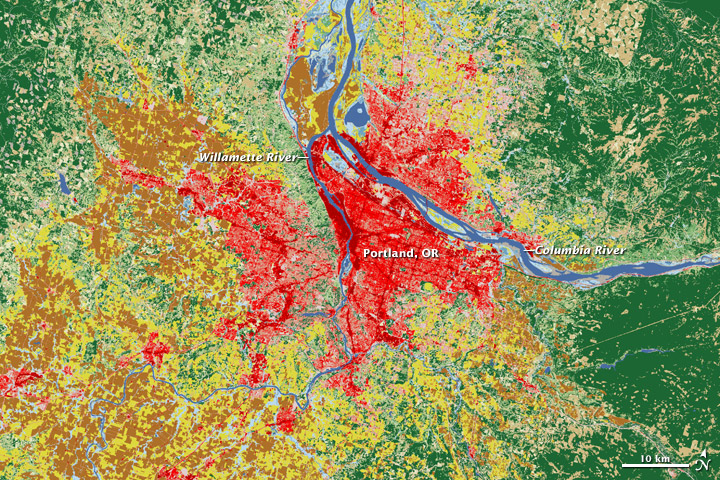 Portland, Oregon, sits at the confluence of the Willamette and Columbia Rivers. The area is a mixture of city, suburb, farm, pasture, and forest. These different land cover types are easily distinguishable from each other in Portland and elsewhere thanks to color-coded maps from the National Land Cover Database, which was developed by the U.S Geological Survey (USGS) and available for free from the Multi-Resolution Land Characteristics Consortium. These land cover maps let government officials and private citizens alike track the extent of urban and suburban areas and the health of surrounding ecosystems.

In this image, the Columbia and Willamette Rivers appear bright blue. Red indicates developed (urban) areas, with darker shades showing more intense development. Croplands are tan and pasturelands are yellow. Forest is green. Other classifications are shown in the key below the map.

USGS land cover classifications have been developed and refined over four decades. In the 1970s, James Anderson and USGS colleagues published A Land Cover Classification System for Use with Remote Sensor Data. The report established hierarchical categories for land cover. For instance, the top-level category of urbanized land includes a sub-category for residential lands, which in turn includes sub-categories of single-family homes, multi-family homes, mobile homes, and so on. The top categories include: built-up land, agricultural land, rangeland, forest, water, wetlands, barren land, tundra, and perennial snow and ice.

The image above is from the National Land Cover Database 2001, which was assembled from observations by the Enhanced Thematic Mapper Plus (ETM+) on Landsat 7. NLCD databases were released for 1992, 2001, and 2006, and work on a 2016 update is underway. The multiple releases let users track changes over time.

Landsat can distinguish between these different land covers because it detects not just visible light, but also infrared. Everything on the surface of the Earth absorbs and reflects light, but different things absorb and reflect different parts of the electromagnetic spectrum to varying degrees. Chlorophyll in plants, for instance, strongly absorbs red and blue wavelengths while reflecting green. Healthy leaves also reflect infrared light. By detecting that wavelength absorption—whether in plants, buildings, roads, or rocks—Landsat can detect subtle differences that human eyes cannot see.

Oregon law requires each metropolitan area to abide by an urban growth boundary (UGB) that separates urban land from rural land. In 1979, Portland established a UGB aimed at concentrating development in existing urban centers and along established transportation routes, while leaving rural areas largely intact. The Portland UGB is a dynamic plan that can be adjusted as needed by state officials; in fact, it has been moved more than 30 times since the 1970s. As of 2010, Portland’s UGB encompassed roughly 400 square miles (1,000 square kilometers) and 1.4 million residents.

Since the Columbia River defines the border between Oregon and Washington, however, the Portland metropolitan area effectively crosses state lines. This has complicated Portland’s efforts to manage urban growth. Across the river from Portland is Washington’s Clark County. A 2004 study by Myung-Jin Jun concluded that growth in Portland was simply shifted to Clark County—which grew by 20 percent from 2000 to 2010—because that municipality lacked similar restrictions on new development. In short, Clark County “played a role as a safety valve for growth outside the UGB,” Jun wrote. “Portland’s UGB raises an interesting issue about the growth management policy of a metropolitan area that crosses state borders.”

Another study by Song and Knapp focusing on Washington County (which comprises the western part of Portland) found that multiple measures of efficient land use—such as city layouts that ease pedestrian access—started to improve in the 1990s. On a regional scale, however, connectivity between neighborhoods still needed improvement. “Portland is winning the war on urban sprawl at the neighborhood scale,” the authors wrote, “or at least appears to have won some important battles; but progress remains elusive at the regional scale.”