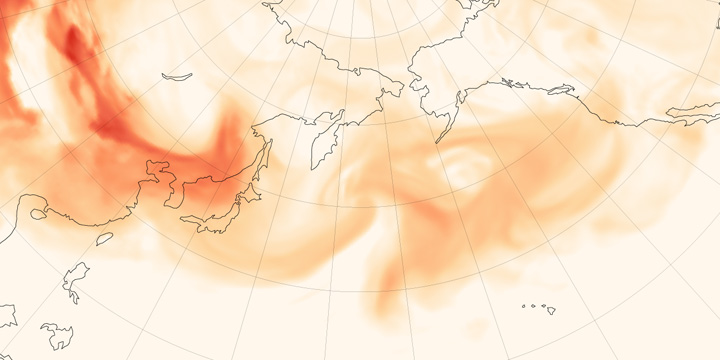 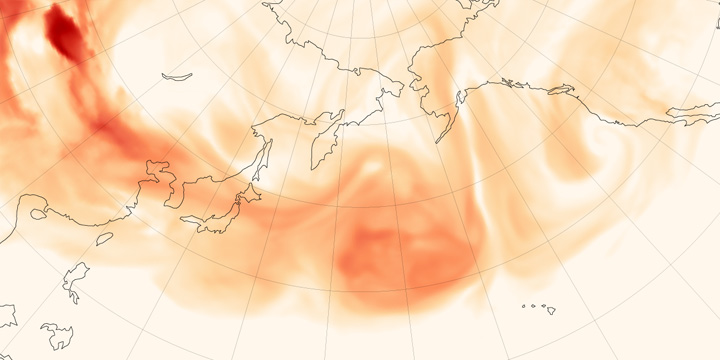 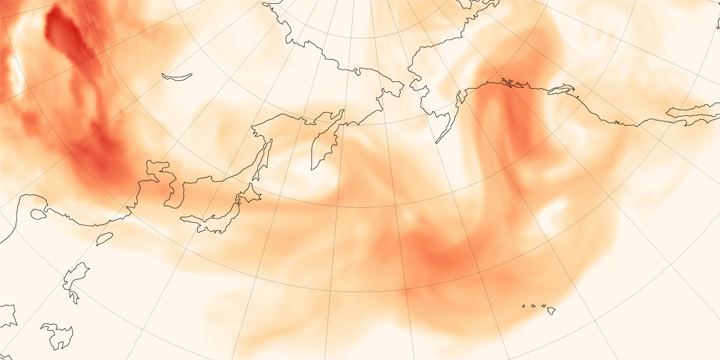 NASA and university scientists have made the first measurement-based estimate of the tiny airborne particles—aerosols—that arrive by air in North America each year. According to the analysis, 64 million tons of dust, pollutants, and other particles cross the oceans and mix into the air over North America each year. That’s nearly as much as the estimated 69 million tons of aerosols produced domestically by natural processes, transportation, and industrial sources.

With the three-dimensional view of the atmosphere provided by satellites, scientists were able to distinguish dust from pollution from combustion. They estimated that dust crossing the Pacific Ocean from Asia accounts for 88 percent (56 million tons) of the total particle import to North America. The results were published in the journal Science on August 2, 2012.

The visualization above shows a model of dust transport from Asia to North America in April 2010 based on a run of the Goddard Earth Observing System Model, Version 5 (GEOS-5). In the images and downloadable movie (linked below the images), the concentrations of dust are shown in a logarithmic scale in which the values represented by the colors increase exponentially, not linearly. Note the strong source points in central China near the Taklimakan Desert. Most of the aerosols are carried by large, episodic dust storms, which occur regularly in the spring.

The study—included aerosol data from instruments on the Terra satellite and the Cloud-Aerosol Lidar and Infrared Pathfinder Satellite Observations (CALIPSO) satellite—is the first quantitative assessment of just how many airborne particles reach North America. “This is a crucial step toward better understanding how these tiny but abundant materials move around the planet and impact climate change and air quality," says Hongbin Yu, lead author and an atmospheric scientist at the University of Maryland and NASA’s Goddard Space Flight Center. Observing aerosols and quantifying their impact on warming or cooling the planet remains one of the most difficult challenges in climate science.

In the study, Yu and colleagues were able to distinguish different particle types and determine their heights in the atmosphere. They then combined that information with wind speed data to estimate the amount of pollution and dust arriving in North America.

Dust and pollution particles rise into the atmosphere and can travel for days (across numerous political boundaries) before settling to Earth. Dust movement is particularly active in spring, when the rise of cyclones and strong mid-latitude westerlies boost particle transport across the Pacific. In addition to the transport from Asia, North America also imports aerosols from Africa and the Middle East.

Dust over the Pacific