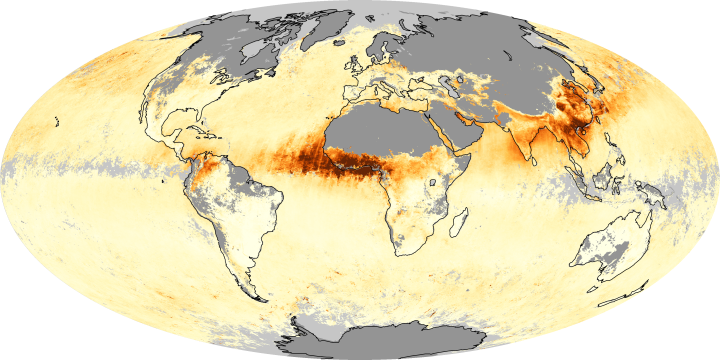 March 2010 was a spectacular month for dust storms. For much of the month, dust blew across Africa’s Sahara Desert and over the Atlantic Ocean. A monitoring station on the island of Barbados in the Caribbean recorded the highest dust concentrations over the island in the past three years. China also saw massive dust storms that swept over the Pacific from the Gobi Desert in China’s interior.

The image shows the concentration of particles in the atmosphere (aerosols) during March 2010. A dark brown plume extends west from Africa where thick dust blew over the ocean. Dark brown patches also cover parts of China and Southeast Asia where aerosols clouded the sky. Dust contributed to the aerosols in the north, but smoke is the likely culprit for high aerosols in the south. Fires burned extensively in Southeast Asia through March, veiling the region in a pall of smoke.

This image was made from data collected by the Moderate Resolution Imaging Spectroradiometer (MODIS) on NASA’s Terra satellite throughout March 2010. Areas where the sensor couldn’t collect aerosol measurements are gray. Since aerosols such as dust, smoke, and haze are often pale, it is difficult to record concentrations over bright surfaces like the deserts of Africa, Arabia, and Asia or the snow-covered landscape of North America, Europe, Asia, and Antarctica. Other gray areas show where clouds consistently blocked the sensor’s view of aerosols.

March 31, 2007, marked opening ceremonies for the first “Green China Day,” established to increase awareness of the need for environmental protection. As reported by ShanghaiDaily.com, however, the ceremony in Beijing saw an unwelcome guest: Gobi Desert dust. Roughly 2,000 kilometers south of the capital city, air quality also suffered, in this case from fires in Southeast Asia.