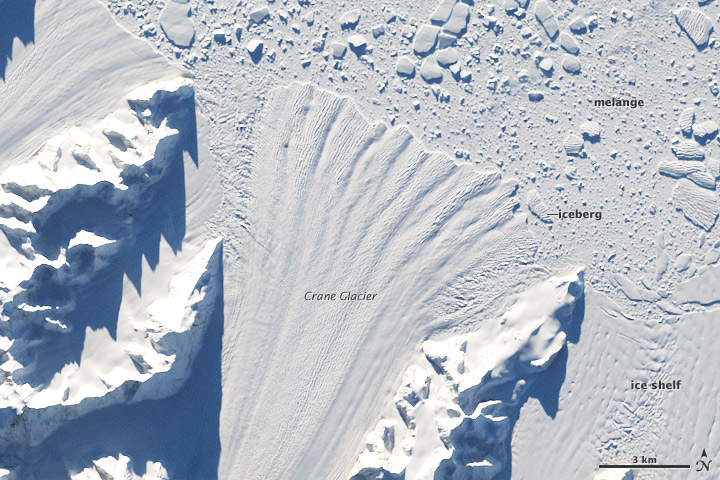 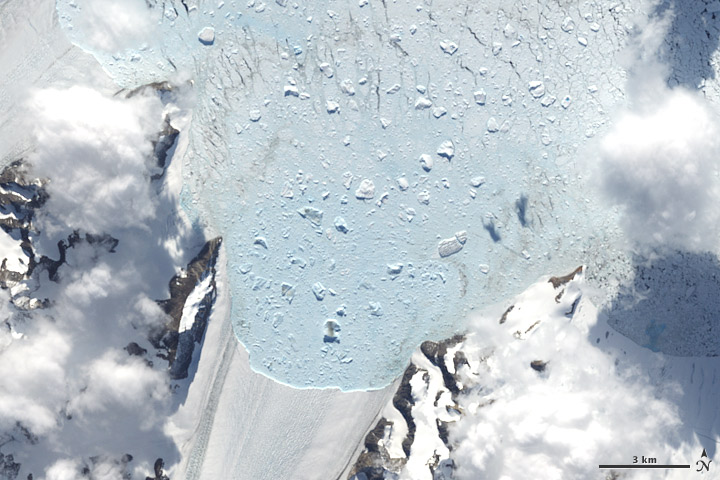 In late Southern Hemisphere summer of 2002, the Larsen B Ice Shelf on the Antarctic Peninsula disintegrated into thousands of pieces. The collapse appears to have been due to a series of warm summers on the Antarctic Peninsula, which culminated with an exceptionally warm summer in 2002. On the surface of the shelf, rows of melt ponds settled into natural crevasses, driving the cracks all the way through the ice shelf.

This pair of images from NASA’s Landsat 7 satellite shows the dramatic impact the collapse had on many of the glaciers that fed the Larsen B Ice Shelf. The loss of the shelf caused the flow of most of the glaciers around the bay to accelerate significantly. More rapid flow and calving of ice bergs caused the margins to retreat inland.

The top image was captured on April 6, 2002, about two months after the dramatic collapse. The bay (image right) is filled with slush and icebergs from the collapsed shelf. Autumn snows have probably already dusted the surface of the mélange of ice; snowfall and seasonal sea ice kept much of the debris frozen in place the first winter after the collapse. The terminus of the Crane Glacier extends into the bay like a fan.

Throughout the summer of 2003, remaining fragments of the shelf broke away, and the mélange of icebergs and smaller ice pieces from the previous summer’s collapse began to drift away. Without the stabilizing presence of the ice shelf, the Crane Glacier retreated dramatically. Its fan-shaped terminus became C-shaped as the glacier’s center crumbled more rapidly than the edges pressed against the mountain walls.

The unusually bright blue tinge of the ice debris in the February 20 image is the reflection from the pure ice on the underside of the ice shelf fragments. Many of the icebergs that crumbled from the edge of the shelf were too tall and narrow to float upright, and they toppled over.

The surface of an ice shelf gets covered by snow, but the underside is very pure ice. Pure, thick ice absorbs a small amount of red light. Photo-like satellite images such as these are made by combining the satellite’s observations of red, green, and blue wavelengths of light reflected from the Earth’s surface. When all these visible wavelengths are strongly reflected, the surface looks white; when the reddest light is absorbed, the reflection takes on a cyan tinge.

NASA images by Robert Simmon based on Landsat-7 data. Caption by Rebecca Lindsey.