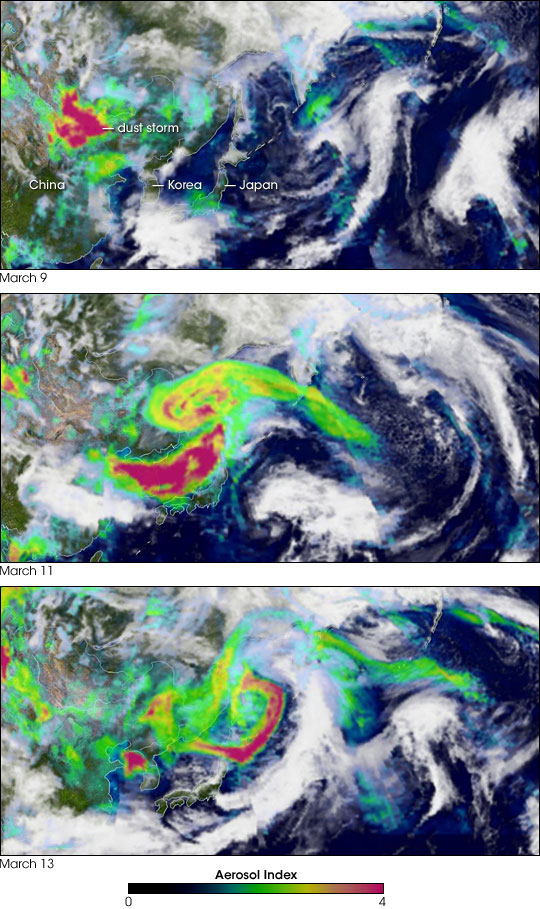 A large dust storm spread aerosols (airborne particles) over Asia and the Pacific starting on March 9, 2006. The storm reached the Beijing region on March 10, and the tiny particles remained aloft for several more days. The dust cloud remained intense as it migrated eastward from China over Korea and Japan. The Ozone Monitoring Instrument (OMI) flying onboard the Aura satellite captured these images on March 9, 11, and 13.

The dust in this storm may have originated in the Gobi Desert. In March and April, dust storms in the Gobi can exceed the total number of storms in that region throughout the rest of the year. It is not uncommon for aerosols from these storms to travel around the world.

Numerous dust storms whipped across China in the spring of 2006. The latest image shows dust and haze over northeastern China in early May.

March 31, 2007, marked opening ceremonies for the first “Green China Day,” established to increase awareness of the need for environmental protection. As reported by ShanghaiDaily.com, however, the ceremony in Beijing saw an unwelcome guest: Gobi Desert dust. Roughly 2,000 kilometers south of the capital city, air quality also suffered, in this case from fires in Southeast Asia.