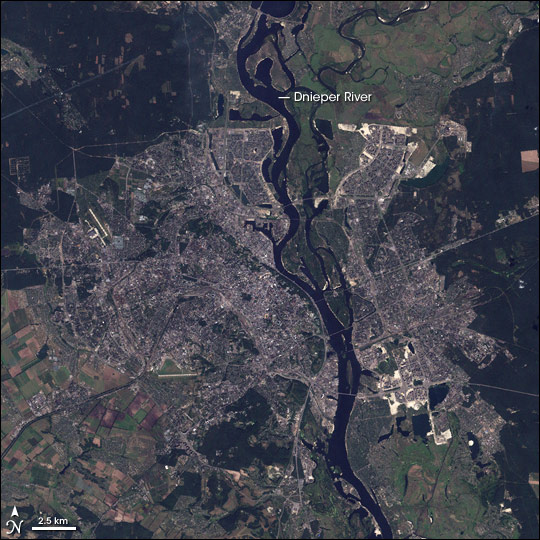 Kiev (also spelled Kyiv) is the capital of Ukraine, the second largest country in Europe (second only to Russia and slightly larger than France). The city’s history has long been entwined with Russia’s. In the region’s early history, Kiev was the capital city of a state that encompassed much of the surrounding lands. Invaded by the Mongols in the 13th century, Kiev fell from primacy, but rebuilt itself and remained a major city power for centuries. It became the capital of the newly independent Ukraine in 1991 when the country declared independence from the Soviet Union.

This natural-color scene of Kiev was acquired by the Landsat 7 satellite’s Enhanced Thematic Mapper Plus (ETM+) on September 14, 2001. The city landscape is dominated by high-rise apartment buildings, a network of wide boulevards, public monuments, and city parks. In this image, green indicates vegetation, blue indicates water, and beige and gray indicate buildings and roads. The geometric shapes of agricultural land show up in the lower left corner of the image, while dark green forests dominate the upper left and the right margin.

Kiev is built on the banks of the Dnieper River, which runs north to south through the center of Ukraine and into the Black Sea. The curving river meanders through the city, and once outside, it widens to a width of 1.6 kilometers (1 mile). Farther downstream, however, it passes through a rocky plateau, changing to a series of rapids that provide hydroelectric power. A large hydroelectric dam just north of the city controls the flow of the river’s water and provides some of the city’s electrical power, though much more power comes from the famous and controversial Chernobyl nuclear power plant farther north.