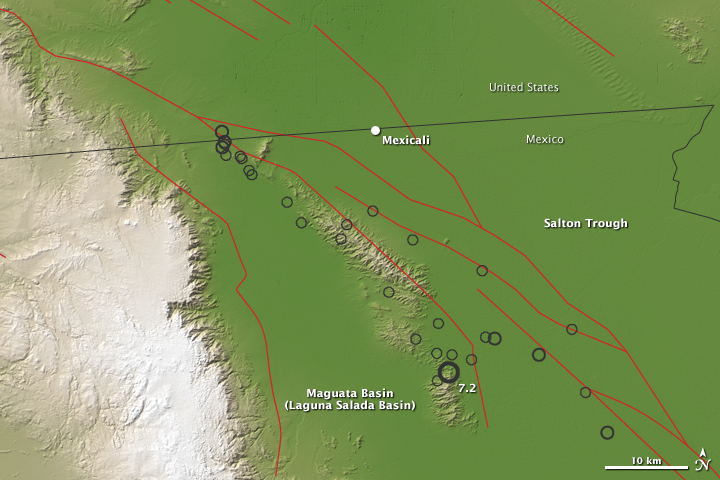 In the southwestern corner of North America, a complicated network of subterranean fractures reveals how the ongoing collision of the Pacific and North America tectonic plates affects Earth’s crust. These weak spots (faults to geologists) occur along the boundary where the two plates grind past each other. On April 4, 2010, a major earthquake (magnitude 7.2) and numerous aftershocks shook the ground in the vicinity of the Laguna Salada Fault in northern Baja California.

This topographic map of the area shows major faults (red lines), as well as the epicenter of the 7.2-magnitude quake (darkest circle) and all 4.0-or-larger aftershocks that occurred through 19:25 UTC on April 5 (12:25 p.m. U.S. Pacific Time). The topography is from digital elevation data collected by the Advanced Spaceborne Thermal Emission and Reflection Radiometer (ASTER) on NASA’s Terra satellite.

According to the U.S. Geological Survey (USGS), the Pacific plate moves northwest with respect to the North America plate at about 45 millimeters per year at the latitude where the quake occurred. The area is about 60 kilometers (40 miles) south of the Mexico-United States border. The USGS describes the geologic setting as “a series of northwest-trending strike-slip (transform) faults that are separated by pull-apart basins.”

These basins are evident in the topographic image. The larger structure is the Salton Trough, a depression that stretches from the Gulf of California, through the modern Colorado River Delta, and northwestward into California as far as the Salton Sea. A line of mountains separates the larger eastern part of the trough (called the Imperial Valley in the United States and the Mexicali Valley in Mexico) from the smaller Maguata Basin (also called the Laguna Salada Basin) to the west.

The USGS reported that the location of the Baja quake was consistent with a rupture of the southeastern end of the Laguna Salada Fault, but said that a definite location would require additional information. Aftershocks extended along the fault system in both directions.

Northwest-southeast-trending mountains and wide basins dominate the topography between the Gulf of California and the Mexico-United States border where a major earthquake occurred on April 4, 2010. 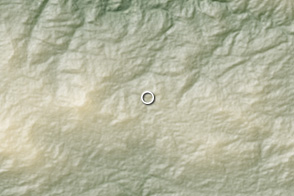