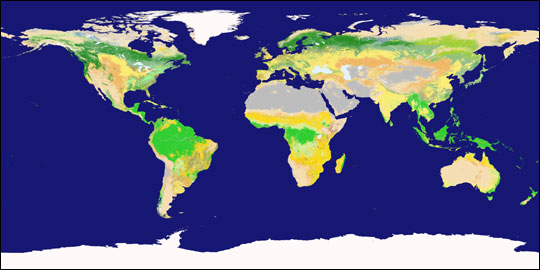 New NASA land cover maps are providing scientists with the most refined global picture ever produced of the distribution of Earth’s ecosystems and land use patterns. High-quality land cover maps aid scientists and policy makers involved in natural resource management and a range of research and global monitoring objectives.

The land cover maps were developed at Boston University in Boston, MA., using data from the Moderate Resolution Imaging Spectroradiometer (MODIS) instrument on NASA’s Terra satellite. The maps are based on a digital database of Earth images collected between November 2000 and October 2001.

The MODIS sensor’s vantage point of a given location on Earth changes with each orbit of the satellite. An important breakthrough for these maps is the merging of those multiple looks into a single image. In addition, advances in remote sensing technology allow MODIS to collect higher-quality data than previous sensors. Improvements in data processing techniques have allowed the team to automate much of the classification, reducing the time to generate maps from months or years to about one week.

This image shows global land cover types in different colors. Each land cover has a different effect on carbon and climate cycles. Snow and ice cool the planet by reflecting sunlight. Tropical rainforests are part of an intricate land-atmosphere relationship that is disturbed by land cover changes such as deforestation. Perhaps the most significant human alteration of land cover is the creation of large areas of agricultural land.