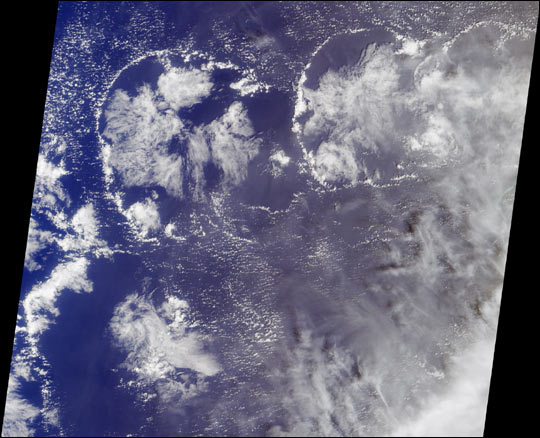 Small cumulus clouds in this natural-color view from the Multi-angle Imaging SpectroRadiometer (MISR) have formed a distinctive series of quasi-circular arcs. Clues regarding the formation of these arcs can be found by noting that larger clouds exist in the interior of each arc.

The interior clouds are thicker and likely to be more convectively active than the other clouds, causing much of the air near the centers of the arcs to rise. This air spreads out horizontally in all directions as it rises and continues to spread out as it begins to sink back to the surface. This pushes any existing small cumulus clouds away from the central region of convection.

As the air sinks, it also warms, preventing other small clouds from forming, so that the regions just inside the arcs are kept clear. At the arcs, the horizontal flow of sinking air is now quite weak and on meeting the undisturbed air it can rise again slightly—possibly assisting in the formation of new small cumulus clouds. Although examples of the continuity of air, in which every rising air motion must be compensated by a sinking motion elsewhere, are very common, the degree of organization exhibited here is relatively rare, as the wind field at different altitudes usually disrupts such patterns. The degree of self organization of this cloud image, whereby three or four such circular events form a quasi-periodic pattern, probably also requires a relatively uncommon combination of wind, temperature and humidity conditions for it to occur.

The image was acquired by MISR’s nadir camera on March 11, 2002, and is centered west of the Marshall Islands. Enewetak Atoll is discernible through thin cloud as the turquoise band near the right-hand edge of the image.

The Multi-angle Imaging SpectroRadiometer observes the daylit Earth continuously from pole to pole, and views almost the entire globe every 9 days. This image covers an area of about 380 kilometers x 345 kilometers.