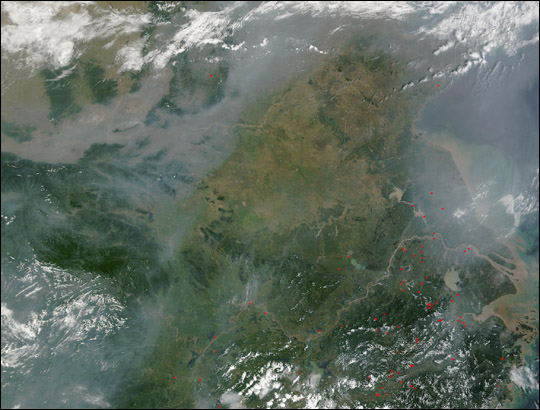 There was a thick layer of smog (grayish pixels) over central portions of China on July 11, 2002, while a thick pall of smoke from dozens of fires (red pixels) in the east obscured the Chinese coastline. There also appears to be heavy sediment (tan-colored water) being carried by the Yangtze River into the East China Sea at lower right—probably the result of heavy rains and high water levels farther inland.

According to a recent report from the United Nations Environment Program, a vast blanket of pollution being called the "Asian Brown Haze" stretches across South Asia on a regular basis. This mixture of emissions from biomass burning, industrial activities, and inefficient use of wood and dung as home heating and cooking sources is reducing agricultural yields, altering rainfall patterns and endangering the health and well-being of hundreds of thousands of people.

Over 200 scientists participated in the study, which drew on data from an international field experiment called the Indian Ocean Experiment (INDOEX), as well as satellite data and computer modelling. For more information, visit the United Nations Environment Program website.

This true-color image was acquired on July 11 by the Moderate Resolution Imaging Spectroradiometer, flying aboard NASA’s Terra satellite. Please note that the high-resolution scene provided here is 500 meters per pixel. For a copy of the scene at the sensor's fullest resolution, visit the MODIS Rapid Response Image Gallery.

There was a thick layer of smog over central portions of China on July 11, while a thick pall of smoke from dozens of fires in the east obscured the Chinese coastline.

Heavy Sediment from the Yangtze River

The heavy load of sediments carried by the Yangtze River into the East China Sea colored the waters along the Chinese coastline light brown on April 12, 2002. This true-color image was acquired by the Moderate-resolution Imaging Spectroradiometer (MODIS), flying aboard NASA’s Terra satellite.