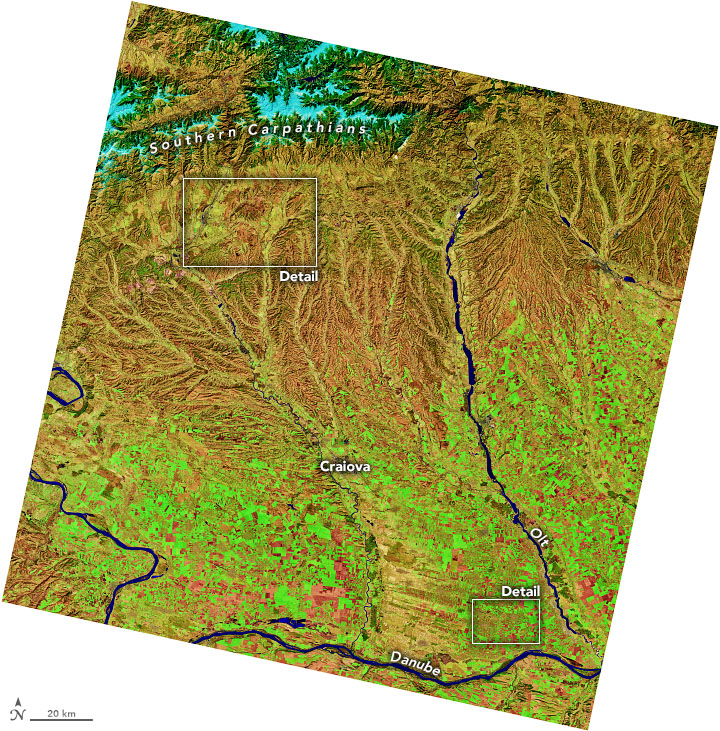 Romania’s landscape has seen plenty of transition in recent decades, as farmers have responded to changes in land management policies and in the natural environment. As a result, many farms display a compelling array of shapes and sizes when viewed from above.

On April 8, 2020, the Operational Land Imager (OLI) on Landsat 8 acquired these images of southwest Romania’s historic Oltenia province. The images are false color (bands 6-5-2) to better distinguish the types of land cover amid the region’s mountains, foothills, and plains.

The top image shows a wide view of the province, bordered to the east by the Olt River, to the south by the Danube River, and to the north by the South Carpathian Mountains. Snow and ice (light blue) cap the range’s higher elevations, which reach up to more than 2500 meters (8200 feet) high. Forested areas of the Carpathians—with ample conifers and deciduous trees—appear dark green and orange.

Forested areas (primarily orange), with plenty of oak and beech trees, also show up in the foothills spanning between 300 and 800 meters (1000 and 2600 feet) in elevation. Notice the bright green color tracing the valleys in the foothills; this is the signature of healthy crops. The relatively flat land along river channels offers suitable terrain for farming in an otherwise rugged landscape. 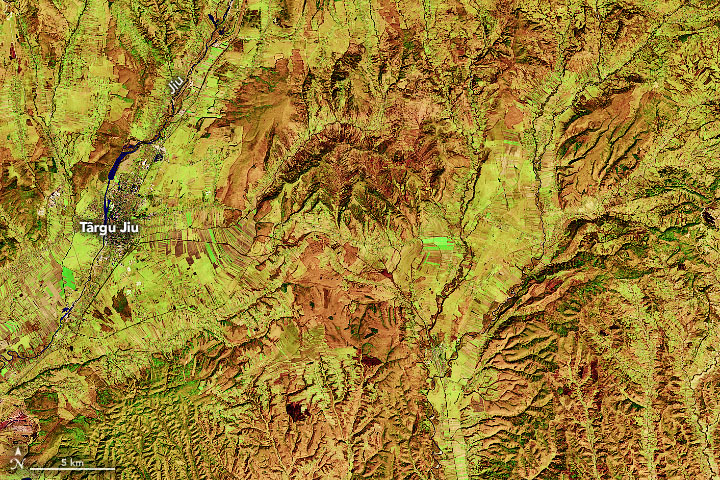 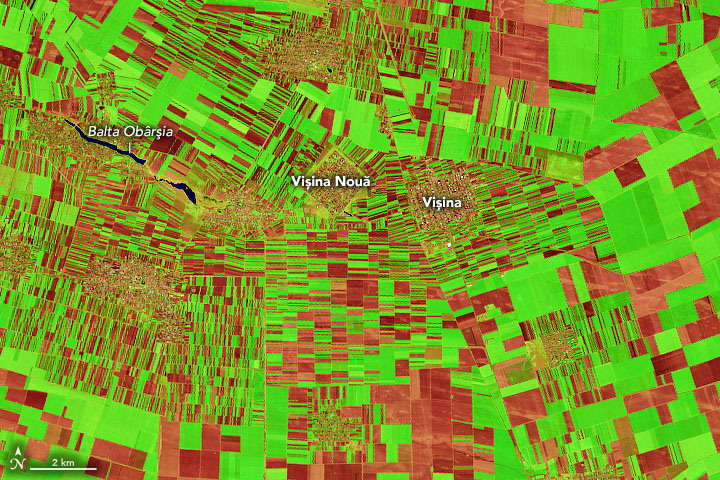 The second image shows a detailed view of the foothills along the Jiu River. The gray patch on the river bank is Târgu Jiu, the capital city of Gorj County. Away from the city, long, narrow farms are generally laid out perpendicular to the rivers and streams. Orchards and vineyards are common across the hilly region, as is pastoral sheep farming.

Farther south beyond the foothills, farming on the Oltenia Plain appears even more widespread. The third image shows a detailed view of bright green crops mixed with brown and red bare ground. The square-shaped boundaries of villages, such as Vișina Nouă and Vișin, add to the geometric patchwork. Only the thin lake (Balta Obârşia) breaks up the scene with a natural shape.

In all of the images, the fields are extremely long and narrow. The narrow shape is due to land fragmentation; that is, farms that were already small have been divided into even smaller parcels. Researchers note numerous reasons for this. For example, land that belonged to cooperatives during the years of communist rule was returned to former land owners, dividing large plots of land into smaller plots. Private plots across the plain span on average just 1-2 hectares (2-5 acres).

Not all land on the Oltenia Plain can currently support crops. Desertification has given way to sand dunes in some areas, while others have been abandoned or deforested.