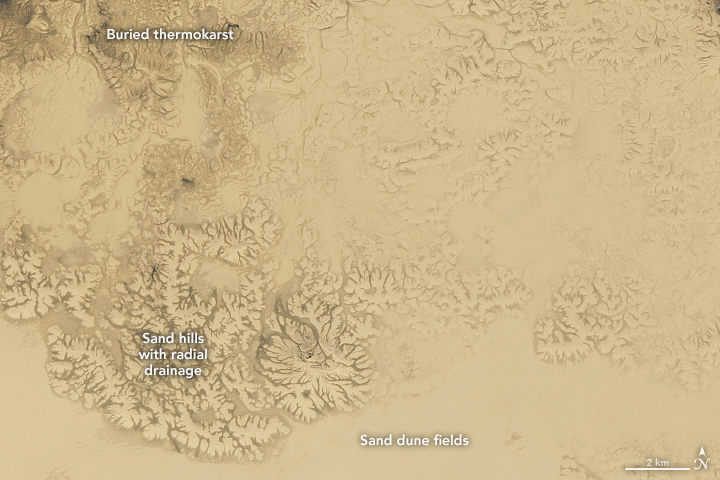 Today’s story is the answer to the Earth Observatory September puzzler.

Bunge Land is one of the most unusual places in the Siberian Arctic. Unlike the vegetated tundra and bedrock surfaces of its neighboring islands, Bunge Land (Zemlya Bunge) is a barren sandy plain. It was discovered in the 1800s and later named after the Russian explorer Alexander von Bunge. Because of its remote location and unique geography, this patch of land has been understudied compared to surrounding regions in Siberia.

The image above shows the central region of Bunge Land on September 11, 2020, as observed by the Operational Land Imager (OLI) on Landsat 8. The image below shows a wider view with the sandy plain sandwiched between two neighboring islands. This image was acquired on August 12, 2012, by the Moderate Resolution Imaging Spectroradiometer (MODIS) on NASA’s Terra satellite. 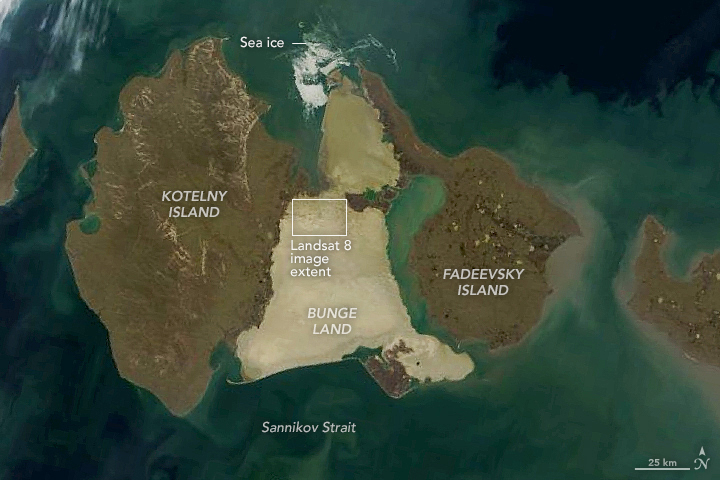 Bunge Land belongs to the Anzhu Islands in the New Siberian Islands archipelago. The 7,000 square kilometer (3,000 square mile) plain is actually a land bridge connecting Kotelny Island and Fadeevsky Island. Some researchers theorize that movements of Earth’s crust caused a patch of seafloor to rise above the water line.

Bunge Land is an Arctic desert and is mostly covered with sand; only 2 percent of the land surface is classified as terrestrial deposits (stony-pebbly weathering deposits, bedrock outcrops). Most of its coastal areas are low elevation and flood easily during storm surges, which likely sculpted many of the surface features. Inland regions are sprinkled with sand dunes, which were probably built by floods and sea ice that rearranged surface sediments. Researchers say rising sea levels in the future will exacerbate flooding on Bunge Land.

The majority of the landscape is flat, but certain features stand out. The southeast and central regions consist of slightly elevated plateaus (10-12 meters high, or 33-40 feet) that are covered by small, shallow thermokarst lakes and streams. Thermokarst landforms are depressions formed by the melting of ground ice. Other regions in the Arctic (like the Lena Delta or Kolyma River) also contain a mix of sandy deposits and thermokarst reliefs.

In the north, a range of hills known as Evsekyu Bulgunyakh break up the homogenous terrain. Using satellite imagery, researchers discovered a sand-buried thermokarst landscape near those hills. They noted that the fossil thermokarst suggests the region was once covered in relatively ice-rich permafrost.