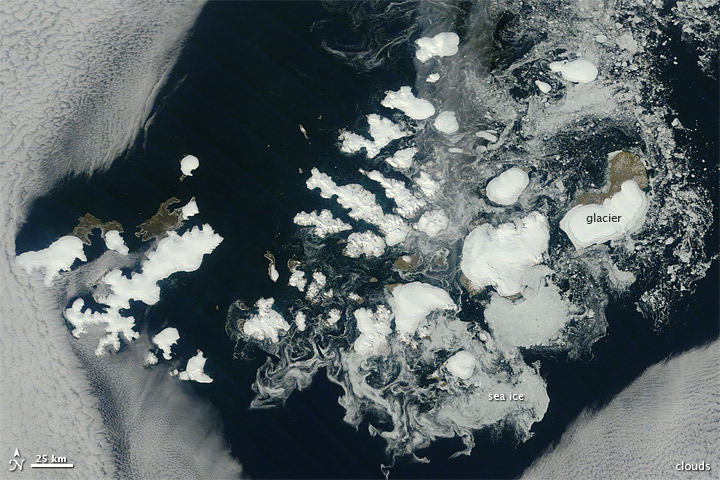 Clouds fringe this natural-color scene, like curtains held back from a window. Around the islands, sea ice forms serpentine shapes of light gray and dull white. The glaciers that cap many of the islands are bright white. In ice-free areas, land cover is pale brown, typical of tundra.

The archipelago is comprised of marine deposits built into low-lying islands. Although some studies have dated the rocks to the Mesozoic Era (the Age of Reptiles), fossils in coal deposits from the eastern reaches of Franz Josef Land suggest that the rocks might be even older.

Geologic processes of uplift and erosion have shaped Franz Josef Land since the time of the dinosaurs. During the Jurassic Period about 206 to 144 million years ago, the islands experienced uplift, and may have been a single landmass. Soon after the area was uplifted, it began to erode. But the erosion was uneven—most intense along the archipelago’s eastern and western margins, and less intense in the center.

During the Cretaceous Period about 144 to 65 million years ago, large-scale seismic activity coated parts of Franz Josef Land with volcanic rock. In more recent times, ice has shaped the archipelago. Beginning about 1.8 million years ago, massive ice sheets advanced and retreated over the Northern Hemisphere, grinding and shaping the land surface. Although ice sheets have retreated, glaciers have remained, coating much of this archipelago in icy white.