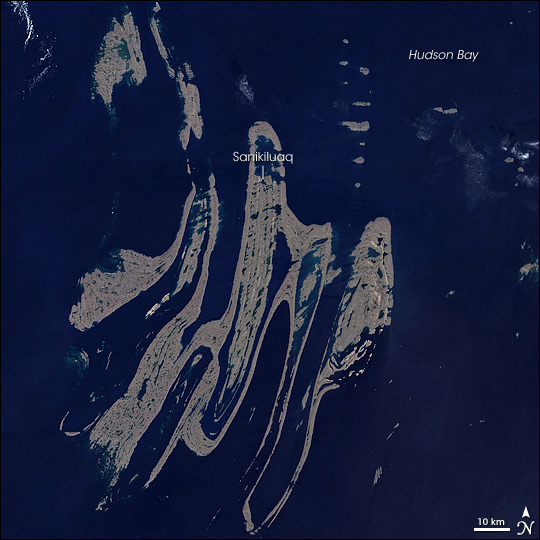 Looking vaguely like marbled paper, the Belcher Islands meander over some 13,000 square kilometers (5,000 square miles) in southeastern Hudson Bay, but within that area, only 2,896 square kilometers (1,118 square miles) is dry land. NASA’s Landsat 7 satellite captured this image of the archipelago on August 9, 2000, when the far north’s brief summer was coming to an end. The mostly brownish hues of the land areas in this image attest to a lack of vegetation; cold temperatures prevent the growth of robust forests. The deep waters of the Hudson Bay appear almost black, with the exception of shallower areas close to land, which appear peacock blue. The archipelago’s small population makes use of the trading post in the town of Sanikiluaq.

Although they appear delicate, the Belcher Islands are actually composed of tough rock that has survived unimaginably long stretches of geologic time. The islands are composed of folded metasedimentary rock. Beginning as the minute grains of rock or dirt eroded off larger rocks by the actions of wind or water, sediments are often re-deposited elsewhere, eventually hardening into sedimentary rocks. If those rocks are subsequently subjected to intense heat and/or pressure, they change into metamorphic rocks. Metasedimentary rocks show evidence of both sedimentary and metamorphic processes, and geologists estimate that rocks in the Belcher Islands range in age from 1.6 to 2.3 billion years old.

During the Pleistocene Ice Age, massive sheets of ice rested on northern North America, and the ice was heavy enough to weigh down the land, pushing some areas below sea level. As the ice retreated, the land slowly rose, including the land areas of the Belcher Islands. The rising of this land is slow, however, and erosion from the waters of the Hudson Bay may keep pace with the rising land, preserving the island’s general appearance for some time.

You can download a 28.5-meter-resolution KMZ file of the Belcher Islands suitable for use with Google Earth. 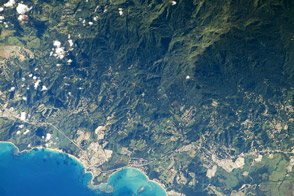