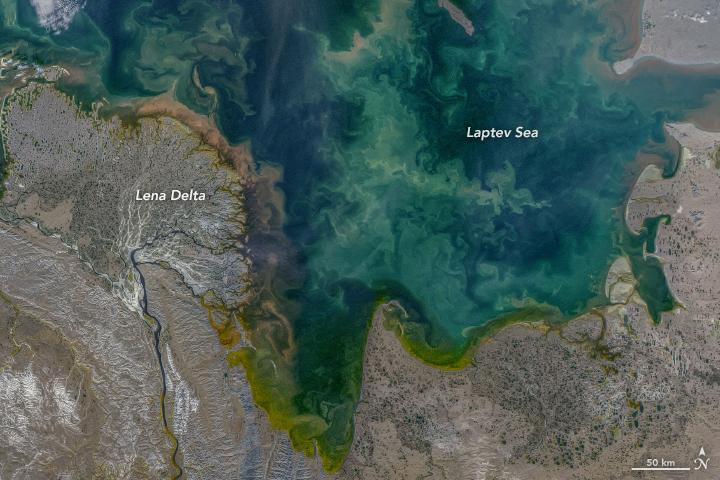 Months before Arctic sea ice reached its annual minimum extent for 2020, the floating blanket of ice had already pulled away from the Siberian coast. The seasonal ice will eventually return, but in mid-September, inland fresh water continued to flow unimpeded into the Laptev Sea.

The result is a colorful mixture of dissolved organic matter and sediments that help trace the water’s otherwise invisible currents and eddies. The Moderate Resolution Imaging Spectroradiometer (MODIS) on NASA’s Aqua satellite acquired this natural-color image on September 10, 2020.

Some of the brown and green color is the result of organic matter—debris from leaves, branches, and peat—dissolved in the river water and carried out to sea. The rivers also carry suspended sediments, adding to the colorful palette. The detailed patterns in the Laptev Sea are real, but certain shades and tones in the data have been separated and filtered to make the sediments and dissolved organic matter stand out.

Phytoplankton might also be present amid the color. Samples collected during a 2015 field study showed that diatoms were abundant in early September in the upper layers of the sea, particularly in areas where seawater had been freshened by discharge from the Lena River. Researchers also found species of dinoflagellates and green algae in the water.

The Lena, Ob, and Yenisei rivers together account for about half of the fresh water supplied to the Arctic Ocean each year. Fresh water from rivers and other sources is important to the ecosystem and to sea ice formation, but it also has the potential to affect ocean circulation patterns and climate.

Scientists have been investigating how freshwater plumes move around the Arctic Ocean and mix with seawater. They are also studying the effect of changes occurring inland. The erosion of permafrost deposits releases large amounts of carbon and nitrogen into the Lena River and the Arctic Ocean, affecting ecosystems and adding greenhouse gases into the atmosphere.