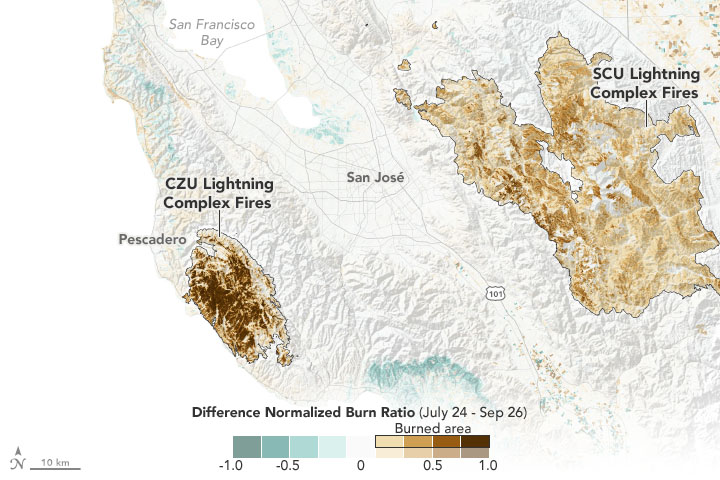 Following an unprecedented outburst of dry lightning in August 2020, wildfires ignited across the state of California. Raging for weeks to months amid heat waves and dry weather, the fires charred millions of acres and consumed homes, livelihoods, and lives. Now state and federal agencies are working to assess the damage.

The map above uses Landsat 8 satellite data to provide some measure of the severity of the burns from the SCU and CZU Lightning Complex fires of August and September 2020. The technique, known as a normalized burn ratio, uses near-infrared and shortwave-infrared data collected on July 24 and September 26, 2020, to detect changes in the greenness of the landscape. The data were analyzed by remote sensing scientist Christopher Potter and colleagues at NASA’s Ames Research Center.

Shades of tan and brown reveal the severity of the burns from each fire, with the darkest shades revealing the greatest damage to the landscape. Areas colored dark brown have little to no live vegetation left; the landscape is mostly covered in soot, ash, and charred stumps and stems. Tan areas were significantly burned but still have some live vegetation. Beyond the fire burn scars, green and light brown areas likely indicate crop growth and harvesting or seasonal changes in trees and other vegetation.

The image below shows the same areas on September 26 as observed in natural color by the Operational Land Imager (OLI) on Landsat 8. 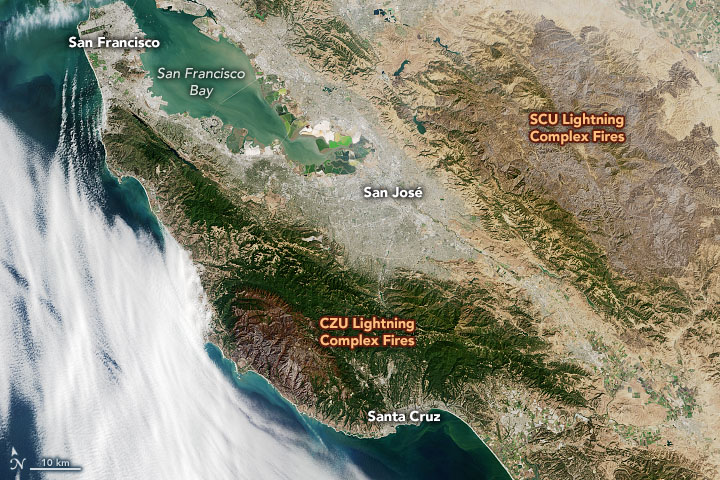 “We needed a clear view of the land surface to make these measurements, and we were lucky enough to get one after so many smoky days,” said Potter, who specializes in satellite studies of land-cover change. “It was the first satellite image we could use to tell how severe the burn was across a broad area.”

Such imagery can help land- and forest managers and other agencies as they assess areas with the worst damage and start cleanup. Teams will be especially keen to prepare for the risk of mudflows and landslides, as winter rain and snow will soon be falling on bare hills. Fire removes trees and plants that normally anchor the soils, making them more prone to slipping during heavy or persistent rainfall. The U.S. Geological Survey has started mapping such threats.

From ignition on August 16 to full containment on September 23, the CZU Lightning Complex fire burned more than 86,500 acres (135 square miles) of coastal forests and hills in Santa Cruz and San Mateo counties. According to the California Department of Forestry and Fire Protection (Cal Fire), at least 1,409 structures (homes, businesses, etc.) were destroyed, 140 were damaged, and one person was killed. Coastal forests were devastated—burned nearly to the ground in many places.

“It is disturbing to see how much of the redwood forest was burned,” said Potter. The fire complex burned hot due to large amounts of dry fuel and consumed forests full of Douglas firs, tanoaks, and redwoods near the Pacific coast.

About 50 miles inland, the SCU Lightning Complex Fire raged across five counties between August 18 and October 1 and became the third largest fire (by area) in California history. Though it did not burn as hot as the CZU fire, the SCU Complex burned a vast area: 396,000 acres (619 square miles) of oak woodlands, grasses, and grazing lands around the Diablo Mountain Range above San Jose. Cal Fire reported 222 structures destroyed and 26 damaged; the fire also menaced the historic Lick Observatory atop Mount Hamilton.

“Those nights of lightning storms were unlike anything we had seen before. And the fires they sparked led to weeks of misery, unbearable air quality, and the loss of lives, homes, and the forests we love,” said Potter, who lives in the area. “Nature unleashed far, far more than we were prepared to handle. It was a nightmare for firefighters.”

According to Cal Fire, more than 4.1 million acres (6,400 square miles) of the state have burned in 2020, and the fire season is not yet over. Five of the ten largest fires in California history have occurred in 2020; seventeen of the twenty largest on record have occurred since 2000.