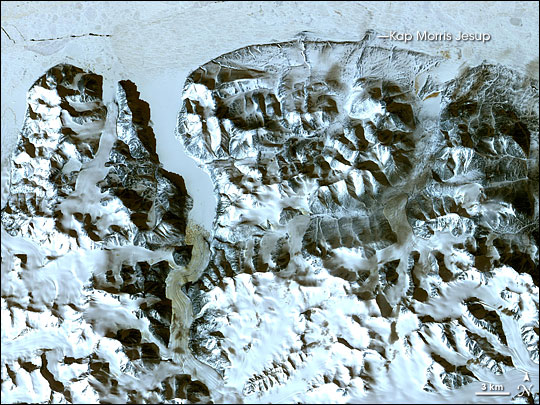 Along the northern coast of Greenland is Peary Land, named for the Arctic explorer who visited at the turn of the twentieth century. This mountainous area rises to an elevation of 1,950 meters (6,398 feet), with fjords carving into the coastline between the peaks. Peary Land supports no permanent human settlement, but it does support vegetation that in turn supports musk oxen.

The Advanced Spaceborne Thermal Emission and Relfection Radiometer (ASTER) on NASA’s Terra satellite captured this image of Peary Land on May 17, 2003. In this springtime shot, sunlight brightens the southeastern faces of the rugged landscape, leaving dark shadows in the valleys. Not all in this image is snow and ice. Brown soil peeks through the snow cover, and soil rests on top of the ice-filled fjords, likely blown there from nearby peaks.

The northernmost tip of Peary Land is considered the northernmost tip of any landmass on Earth. Kap Morris Jesup (also known as Cape Morris Jesup) pokes northward from the coastline into the Arctic Ocean. (A gravel bank north of this point was identified in an aerial survey, but gravel banks are not generally considered landmasses.) Given its remoteness and extreme climate, Peary Land was incorrectly mapped for many years. Advances in remote-sensing technology helped improve mapping techniques.