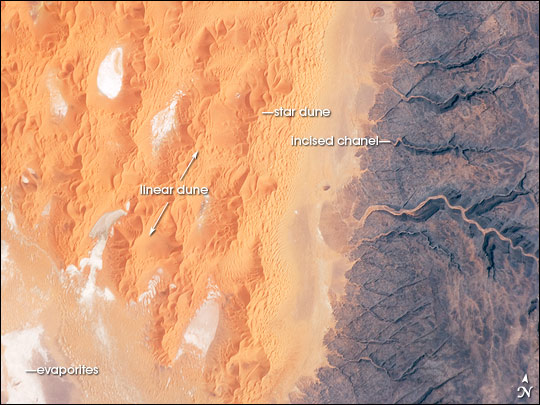 The Tifernine Dune Field is located at the southernmost tip of the Grand Erg Oriental, a “dune sea” that occupies a large portion of the Sahara Desert in eastern Algeria. This astronaut photograph illustrates the interface between the yellow-orange sand dunes of the field and dark brown consolidated rocks of the Tinrhert Plateau to the south and east (image right). Three distinct landforms are visible in the image, each providing information about past and present climate in the area.

The oldest landform is represented by the rocks of the Tinrhert Plateau, where numerous channels incise the bedrock; these channels were eroded during a wet and cool climate period, most probably by glacial meltwater streams. As the dry and hot climate that characterizes the Sahara today became established, water ceased to flow in these channels. Winds eroded and moved large amounts of drying sediment (sand, silt, and clay), which piled up in large, linear dunes that roughly parallel the direction of the prevailing winds of the time (image center).

The present climate is still hot and dry, but current wind directions are more variable. The variable winds are modifying the older, linear dunes, creating star dunes, recognizable by a starfish-like pattern when seen from above. White to grey regions within the dune field are exposed deposits of silt and clay, together with evaporite minerals (such as halite, or common table salt) formed by evaporation of water that collected in small basins between the dunes.

Astronaut photograph ISS017-E-13025 was acquired on August 12, 2008 with a Nikon D2Xs digital camera fitted with a 400 mm lens, and is provided by the ISS Crew Earth Observations experiment and the Image Science & Analysis Laboratory, Johnson Space Center. The image was taken by the Expedition 17 crew. The image in this article has been cropped and enhanced to improve contrast. Lens artifacts have been removed. The International Space Station Program supports the laboratory to help astronauts take pictures of Earth that will be of the greatest value to scientists and the public, and to make those images freely available on the Internet. Additional images taken by astronauts and cosmonauts can be viewed at the NASA/JSC Gateway to Astronaut Photography of Earth. Caption by William L. Stefanov, NASA-JSC.