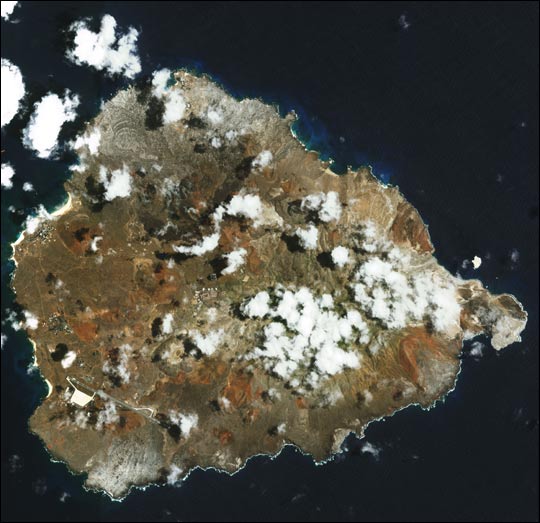 In the southern Atlantic Ocean roughly midway between central South America and central Africa, sits Ascension Island. A small, rocky, volcanic outcrop covered in many places by lava flows and cinder cones of dormant volcanoes, the island sits just west of the Mid-Atlantic Ridge. In this amazingly detailed image from the Ikonos satellite on February 24, 2003, marbled-looking lava flows can be seen dominating the northwest coast, with smaller flows visible on the southwest coast below the island’s Wideawake Airfield, as well as on the southeast coast. Northeast of the airstrip, a large cinder cone is visible, its dark brown center fading to tan is a series of pale rings. This crater, the island’s largest, is called Devil’s Riding School. Crisp, white surf breaks along the shores.

The rugged island is barren in many places, and has no indigenous human population. Instead the residents of the island are there because of Ascension’s main industry: communications. The island has a long history as a communications hub for telephone and radio communications and as a base for satellite tracking stations, including a NASA station built in the 1960s that no longer operates. The European Space Agency operates a tracking station for its Ariane spacecrafts on the eastern side of the island.

Ascension Island is one of, if not the most important breeding grounds for seabirds in the tropical Atlantic Ocean. The population of seabirds has been under threat since the first humans sailed up to the island in the 1500s. The ships accidentally introduced black rats, which overran the island, until feral cats were introduced to curb the rat population. The feral cats have decimated the bird populations, and in fact, are probably responsible for the extinction of two of the islands native land birds. A restoration project is underway to control the cat population and revive the seabirds.