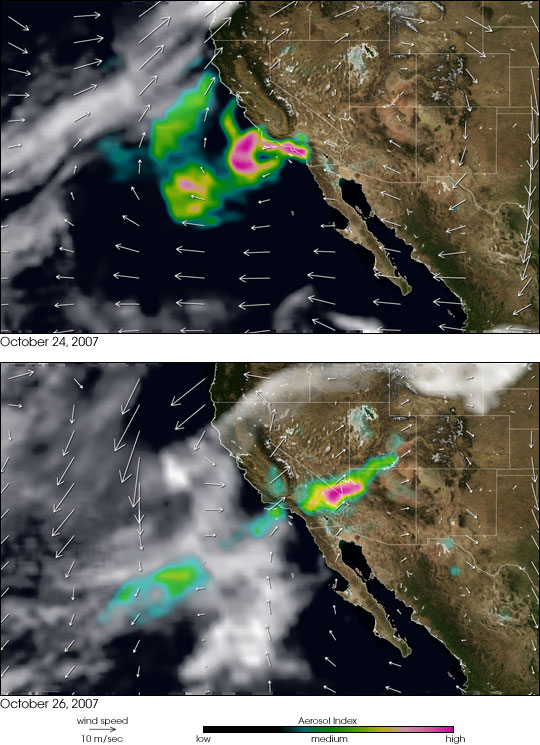 In addition to the dangers that a wildfire’s flames pose to people, wildlife, and property, the smoke that they billow out poses a health hazard over an even larger area. Smoke not only contains carbon monoxide, which is poisonous, it also contains tiny soot particles that can work their way deep into people’s (and other animals’) lungs, causing respiratory irritation and distress. During the fires in Southern California during the fourth week of October, the air quality in many areas deteriorated to levels that the Environmental Protection Agency categorizes as “unhealthy.”

This pair of images shows the location and thickness of smoke on October 24 and 26 combined with arrows showing wind speed and direction. The smoke was observed by the Ozone Monitoring Instrument on NASA’s Aura satellite. OMI measures how much the smoke particles (aerosols) reduce the intensity of sunlight reaching the Earth’s surface. Places where aerosols were thickest are colored pink, clear air is transparent, and clouds are white. White arrows show wind patterns at about 3 kilometers altitude (data is from the National Weather Service’s National Centers for Environmental Prediction). The longer the line, the stronger the wind.

During the first days of the fires (the animation starts on October 22), strong Santa Ana winds blew steadily offshore from the high-altitude deserts of the Great Basin; smoke spread far out over the Pacific. On October 24 (top), the Santa Ana winds began to weaken (wind arrows are much shorter). The winds continued to make a large, clockwise spiral around an area of high air pressure over the Four Corners area of the Southwest, and smoke was pushed north as well as west. By October 26 (bottom), winds over California were onshore, and the smoke from the still-smoldering fires spread northeastward into Nevada, Arizona, and Utah. By October 27 (last frame of animation), smoke had reached Colorado.

Santa Ana winds are a common occurrence in Southern California in the fall. Cold air often sinks into the Great Basin deserts to the east of California. As the air piles up at the surface, high pressure builds, and the air begins to flow downslope toward the coast. When winds blow downslope, the air gets compressed, which causes it to warm and dry out. In fact, the air can warm at a rate of 10 degrees Celsius per kilometer of descent (29 degrees Fahrenheit per mile). Canyons and passes funnel the winds, which increases their speed. Such winds spread fire and smoke, and they also dry out vegetation, making it even more flammable.