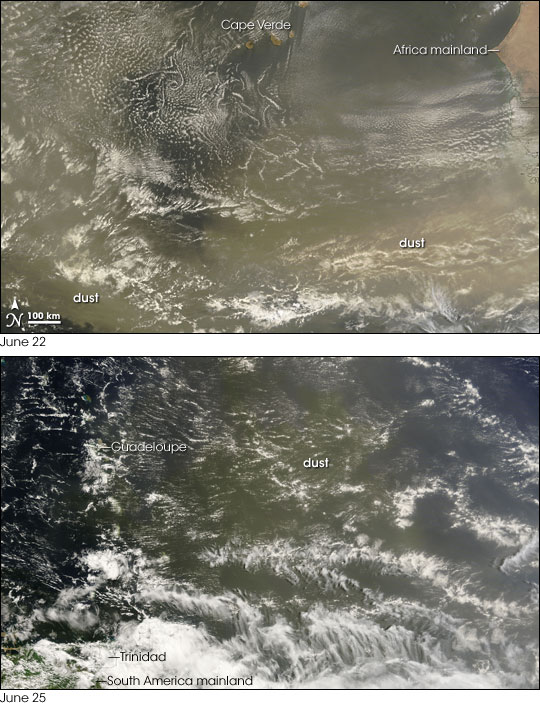 On June 22, 2007, a plume of Saharan dust blew off the west coast of Africa. Over the next few days, the dust cloud remained relatively intact as it traveled across the Atlantic Ocean to South America. The Moderate Resolution Imaging Spectroradiometer (MODIS) on NASA’s Terra satellite observed the dust plume’s progress. Terra acquired both of these images, on June 22, 2007 (top) and June 25, 2007 (bottom).

The June 22 image shows the massive dust plume blowing off the west coast of Africa toward the west in a slightly clockwise direction. As the dust blows, vortex streets—swirling clouds that occur in the wake of air-flow obstacles such as islands—meander southward from Cape Verde. Cape Verde receives regular doses of African dust, but dust often travels much farther west, as the June 25 image shows. Although less distinct than it appeared three days earlier, the plume is still discernible as it approaches the Caribbean and mainland South America. In the south, cloud cover obscures the view of the plume.

Saharan dust brings mixed blessings as it crosses the Atlantic. Although the dust may bring pathogens that harm Caribbean corals and worsen asthma symptoms among humans, the dust is also beneficial. Without Saharan dust, islands in the Caribbean might be little more than hulks of barren rock; the dust supplies the islands with soil. Likewise, a study published in 2006 identified the Bodele Depression as the source for soil nutrients in the Amazon.

Saharan dust blew off the west coast of Africa and over Cape Verde on June 22, 2007, continuing a pattern of dust storm activity for the second consecutive day. Two days after the dust storm began, satellites tracked the plume's progress westward across the Atlantic Ocean.