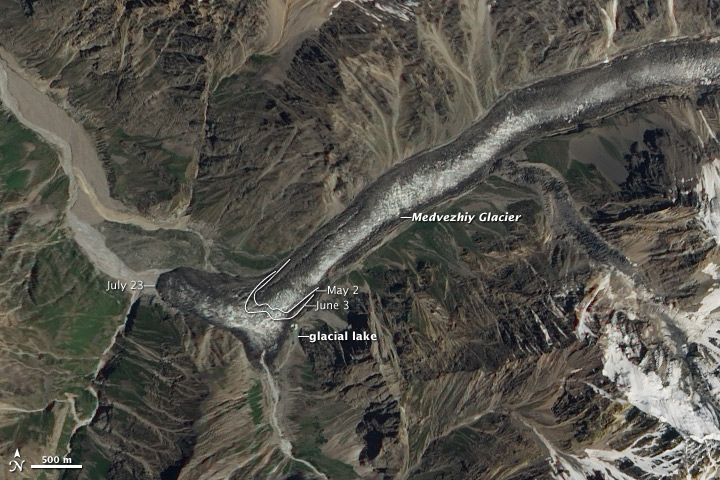 In the early summer of 2011, the Medvezhiy Glacier in Tajikistan slid abruptly down its valley and for greater distance than it has in at least 22 years. The sudden downhill slide of the glacier raised concern among glaciologists and emergency management groups about a potential glacial outburst flood that could flow down into the Vanch River valley.

According to satellite imagery and reports from local scientists, the glacier has moved roughly 800 to 1,000 meters since June 2011. The glacier normally moves 200 to 400 meters in an entire year. The mud-covered terminus of the glacier now blocks the Abdukagor River and is forming a lake behind a wall of ice 150 to 200 meters high and 300 to 350 meters across. Cracks and ice tunnels may be allowing some water to flow through; a bridge across the river downstream has been washed out from one water surge so far.

The Advanced Land Imager (ALI) on NASA’s Earth Observing-1 (EO-1) satellite captured this natural-color image of Medvezhiy Glacier on July 23, 2011. Annotations mark the position of the glacier terminus on May 2, June 3, and July 23, 2011.

Located in southern Tajikistan in the Pamir Mountains, Medvezhiy (Bear) Glacier is roughly 16 kilometers long, and drains out of the Academii Nauk (Academy of Sciences) Range. The upper end of Medvezhiy sits 4,500 meters above sea level, with the terminus at roughly 3,000 meters. It is described by glaciologists as a pulsating glacier with periodic surging; the most recent surges were 1989 and 2001.

Major surges in 1963 and 1973 caused the formation of ephemeral lakes that swelled behind the ice. In each case, the glacier surged as much as two kilometers down the valley and blocked the Abdukagor River with ice dams as much as 100 meters high. When the ice dams broke, more than 20 million cubic meters of water flowed down the river. No lives were lost in those instances, but infrastructure damage was significant, according to reports. Scientists have regularly surveyed the area since the 1960s.