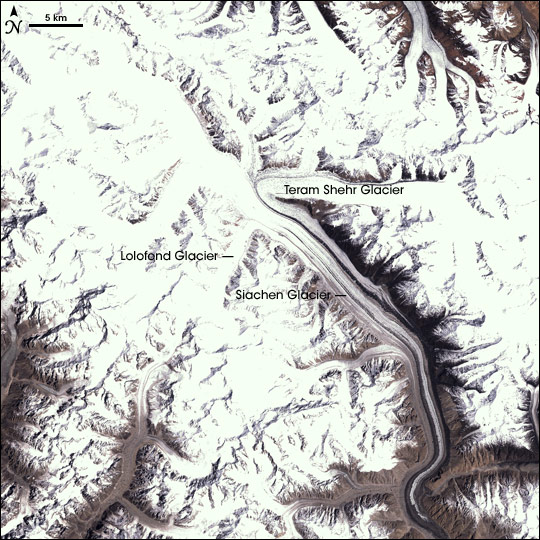 At an altitude of roughly 5,400 meters (17,700 feet), the Siachen Glacier in Kashmir is a forbidding place. Blizzards can last for weeks, temperatures can drop to -55 degrees Celsius (-67 degrees Fahrenheit), and crevasses can swallow a person whole. At much lower altitudes, the glacier’s impact is benign: it is the source of the Nubra River, a tributary of the Indus River flowing into Pakistan and the Arabian Sea.

Sometimes described as a white snake, the Siachen Glacier is more than 70 kilometers long. Lying inside a rock-strewn trough roughly 2 kilometers wide, the glacier is covered with snow in the middle. Landsat 7 took this picture on May 18, 2001. The glacier’s central region is covered with snow, and that snow and the rest of the glacier’s icy surface appear white. Glaciers can merge together like rivers, and that is the case here. Several tributary rivers of ice flow together, such as the Lolofond and Teram Shehr glaciers, adding their ice to the Siachen Glacier as it winds southeast, where the Nubra River emerges from its terminus. In the scene, snow and ice cover most of the jagged peaks of the Himalaya Mountains. At an altitude far too high to support a forest, the bare mountainous surfaces appear in varying shades of beige.

India and Pakistan fought for control of this glacier starting in the 1980s. Long known as the world’s highest battleground, the glacier could enjoy a different status. By early 2006, some diplomats discussed making the area a peace park.