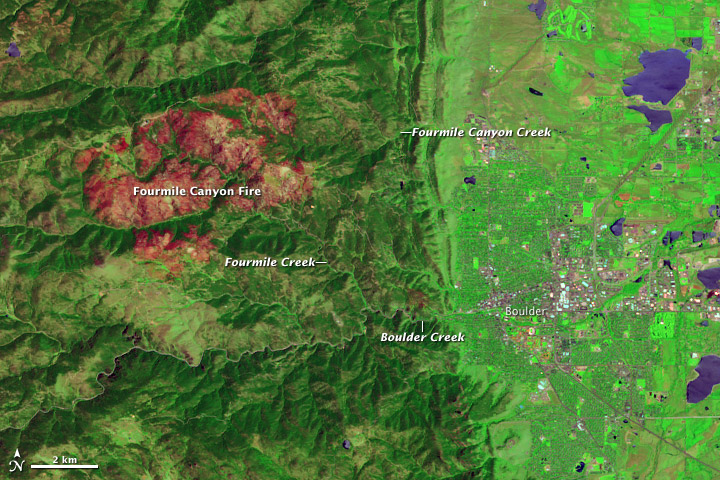 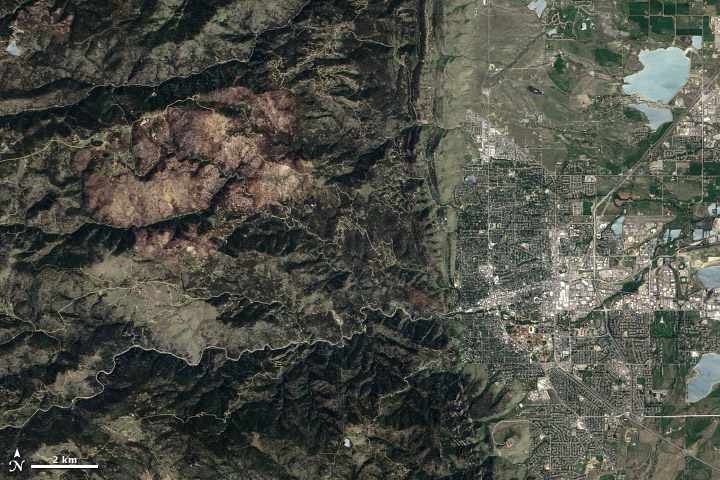 In September 2010, the Fourmile Canyon Fire broke out in the foothills west of Boulder, Colorado, scorching more than 6,000 acres (2,500 hectares) and forcing residents to evacuate. Ten months later, residents had to evacuate again, this time to flee floods. Stripped of vegetation, the slopes along Fourmile Canyon soaked up little of the water dropped by a thunderstorm. Instead, the runoff surged into local stream channels.

On June 7, 2011, the Advanced Land Imager (ALI) on NASA’s Earth Observing-1 (EO-1) satellite observed the Fourmile Canyon burn scar. The top image is made from a combination of shortwave infrared and visible light. The bottom image is natural color.

The scar is more easily detected in the false-color image, where the burned area appears in shades of red and orange. Creek valleys, which generally escaped the flames in September 2010, form winding corridors of green through the scar. To the east and southeast, the city of Boulder lies on relatively flat land.

After the fire, the U.S. Geological Survey (USGS) warned residents to prepare for the possibility of flooding, even from small rainstorms. Late on July 13, 2011, such a storm occurred. As rain fell west of Boulder, Fourmile Creek rose rapidly. In fact, at one USGS gauge, the water discharge rate skyrocketed in a matter of minutes from 10 cubic feet per second to 350 cubic feet per second. The increased water flow translated into a 4-foot (1.2-meter) surge down the creek. Smaller surges followed later that night and over the next few days.

Fourmile Creek is a tributary of Boulder Creek, which flows eastward through the city. Water levels usually peak between mid-May and early July. But thanks to the melting of an unusually heavy snowpack, water levels on Boulder Creek were especially high when the July 13 thunderstorm struck. As residents in the Fourmile burn area were ordered to evacuate low-lying homes, emergency sirens also sounded in Boulder.

By late July 2011, water levels had receded along both the Fourmile and Boulder Creeks, although water levels in both remained above normal. Colorado’s monsoon season typically lasts from about mid-July to early September, so the possibility of more flooding remains.

Because of the angle of sunlight, these images may cause an optical illusion known as relief inversion.