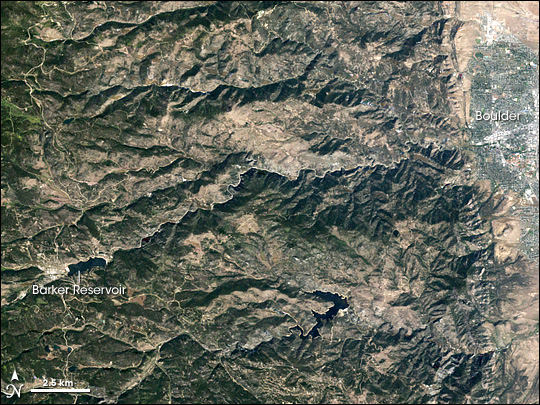 Colorado’s Boulder Creek passes through a significant change in landscape as it flows downhill toward the city of Boulder. Between Barker Reservoir in the west, and the Boulder city limits in the east, the creek flows through Boulder Canyon. Closely following the creek’s path is Boulder Canyon Drive, a mountainous highway that meanders through the foothills.

The Enhanced Thematic Mapper Plus on NASA’s Landsat-7 satellite captured this image of Colorado’s Boulder Canyon on September 19, 2005. Although the curving white line between the reservoir and the city might look like it rests atop ridges, the opposite is true. That line is the highway that runs next to the creek on the canyon floor. On either side of the highway, evergreen trees, bare ground, and dry vegetation produce a landscape of green and beige.

Along the right side of the image, the pale gray hues and straight lines common to urban landscapes reveal the outskirts of the city of Boulder. In the west is Barker Reservoir, outlined with an off-white shoreline. In this end-of-summer image, the region is fairly dry, and the reservoir’s water level is lower than it would be in springtime. Barker Reservoir was created in 1906 when the local public utility dammed the creek, and this artificial lake now helps meet the water needs of the city of Boulder.

Essentially a mountain stream, Boulder Creek is too small to appear in this image, but the creek nevertheless can overflow its banks on occasion. Once it exits the canyon, the creek enters a floodplain that extends throughout much of Boulder, according to the Boulder Area Sustainability Information Network. In 1894, the creek experienced a 100-year flood event after 60 hours of continuous rain. In the spring of 2008, authorities worried about the possibility of another flood. Because the Colorado Rocky Mountains received unusually heavy snow during the winter of 2007-2008, the snowmelt resulting from the spring thaw threatened to overwhelm many of Colorado’s rivers and streams.

Big Thompson Canyon in northern Colorado is the site of the state’s worst natural disaster—a 1976 flash flood that killed 144 people.