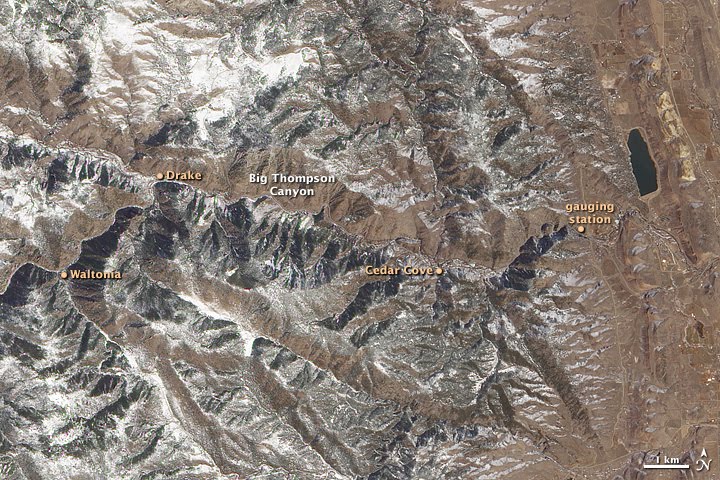 Northern Colorado’s Big Thompson River flows from the Rocky Mountains (west) to the Great Plains (east) through a steep-walled, boulder-strewn canyon. U.S. Highway 34 winds its way through the canyon, connecting Loveland and other northern Denver suburbs to the main entrance of Rocky Mountain National Park. Tragically, the heavily traveled tourist route became the site of the worst natural disaster in Colorado’s history during a catastrophic flash flood in July 1976.

This natural-color image of the lower reaches of Big Thompson Canyon illustrates two of the three natural factors that contributed to the flood’s severity: steep terrain and sparse vegetation. Evergreen forests of Douglas fir and Ponderosa pine manage to grip some of the steep slopes, but in many places—most of the northern wall of the canyon, for example—there is little soil or vegetation to absorb or slow the flow of water. The steepness of the terrain is emphasized by the deep shadows that darken north- and northwest-facing slopes.

Two other factors that contributed to the disaster aren’t observable in the image. The first was a freak thunderstorm that dumped almost an average year’s worth of rain between 6:30 p.m. and 10:30 p.m. The gauging station at the mouth of the canyon recorded peak flow of 883 cubic meters per second, four times higher than the previous record flood. The final contributing factor was a human one: the canyon was unusually crowded with visitors on a three-day-weekend holiday celebrating the 100-year anniversary of Colorado statehood.

Eyewitness accounts describe a 20-foot wall of water carrying trees, boulders, cars, and houses. Hundreds of people had to be evacuated from rooftops and canyon ledges, and cabins, motels, and other tourist facilities in towns from Waltonia to Cedar Cove were swept away. One hundred forty-four people were killed.

Big Thompson Canyon in northern Colorado is the site of the state’s worst natural disaster—a 1976 flash flood that killed 144 people.