Water Flow in the Amazon 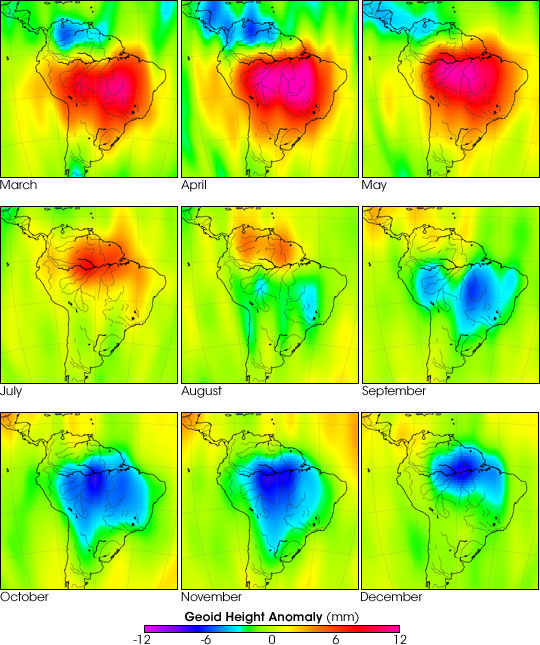 The Amazon River basin carries a larger volume of water than any other river basin on Earth. So much, in fact, that seasonal increases and decreases in the volume of water flowing through the river have a measurable impact on the Earth’s gravity field over equatorial South America over the course of the year.

The series of images above shows monthly changes in gravity detected by NASA’s Gravity Recovery and Climate Experiment (GRACE) between March and December 2003. For the GRACE observations of the Amazon, monthly changes in gravity are largely due to the movement of surface water and groundwater. Each individual image shows the difference between that month’s gravity and the region’s average gravity for a 14-month period, expressed as ‘geoid height anomaly.’ Areas of orange, red, and pink on the maps show areas of higher-than-average gravity, and therefore more water, while green, blue, and purple are areas with lower-than-average monthly gravity.

A map of geoid height anomalies is, in a sense, a topographic map of the Earth’s gravity relative to some reference. Similar to how a mountain appears as a high relative to sea level, areas of stronger gravity appear like hills (highs) and areas of weaker gravity appear like valleys (lows) in these maps. For this region, a geoid height anomaly of 1 millimeter implies that GRACE detected a gravity change roughly equivalent to the change that an additional 4 centimeters of water would produce.

The Amazon River Basin experiences dramatic differences in seasonal rainfall. The rainy season begins in the early part of the year and peaks in May; the remaining months become progressively drier. GRACE tracks these seasonal trends, with large areas of red and pink in March through May in the region south of the Amazon River. During this same period, the smaller Orinoco River Basin to the north experiences drier-than-average conditions, and therefore water and gravity decrease (blue) compared to the 14-month average. In July and August, increasing red areas along the Orinoco indicate an increase in water.

Both basins become drier throughout the remainder of the year. The Orinoco stays near or just below the 14-month average between September and December, while the geoid height anomaly in the Amazon is between -6 and -9 millimeters, equivalent to a drop in water of approximately 24 to 38 centimeters.