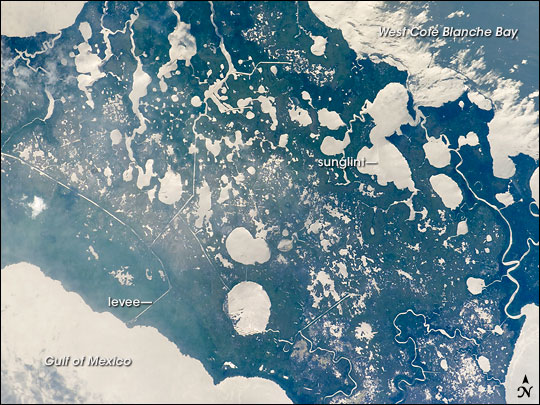 Marsh Island, located along the southwestern coastline of Louisiana, is a remnant of an abandoned lobe of the Mississippi River Delta formed approximately 5,000–7,500 years ago. It is composed primarily of organic-rich muds and brackish marsh vegetation, but some peat (layers of vegetation that have partially decomposed while submerged in water) is also present. In this astronaut photograph, silver-gray sunglint highlights the intricate network of lakes, ponds, and streams on the island. (Sunglint is the mirror-like reflection of sunlight off water surfaces directly back to the astronaut onboard the International Space Station.)

Sunglint also illuminates water surfaces in the adjacent Gulf of Mexico and West Cote Blanche Bay. The variations in brightness comes from differences in surface roughness, which changes based on wind-driven waves or currents and the presence of surfactants—molecules that reduce the water’s surface tension. Synthetic detergents are surfactants, but natural surfactants are also produced by plants, including seaweed.

Marsh Island is a popular fishing, shrimping, and birding location. The island has lost nearly 3,000 hectares (7,000 acres) of vegetation and land area due to erosion, with a corresponding loss of habitat for local and migratory birds, shrimp, alligators, and deer. While Marsh Island is uninhabited, it has been the focus of intensive development for management of erosion, such as revegetation of deteriorated marsh areas. Leveed canals help drain areas for above-surface revegetation, while sill dams (submerged ridges that separate two water basins) help stabilize water levels and foster regrowth of important sub-surface vegetation such as widgeon grass.

The featured astronaut photograph ISS015-E-7725 was acquired May 11, 2007, by the Expedition 15 crew with a Kodak 760C digital camera using a 400 mm lens. The image is provided by the ISS Crew Earth Observations experiment and the Image Science & Analysis Laboratory, Johnson Space Center. The image in this article has been cropped and enhanced to improve contrast. The International Space Station Program supports the laboratory to help astronauts take pictures of Earth that will be of the greatest value to scientists and the public, and to make those images freely available on the Internet. Additional images taken by astronauts and cosmonauts can be viewed at the NASA/JSC Gateway to Astronaut Photography of Earth.