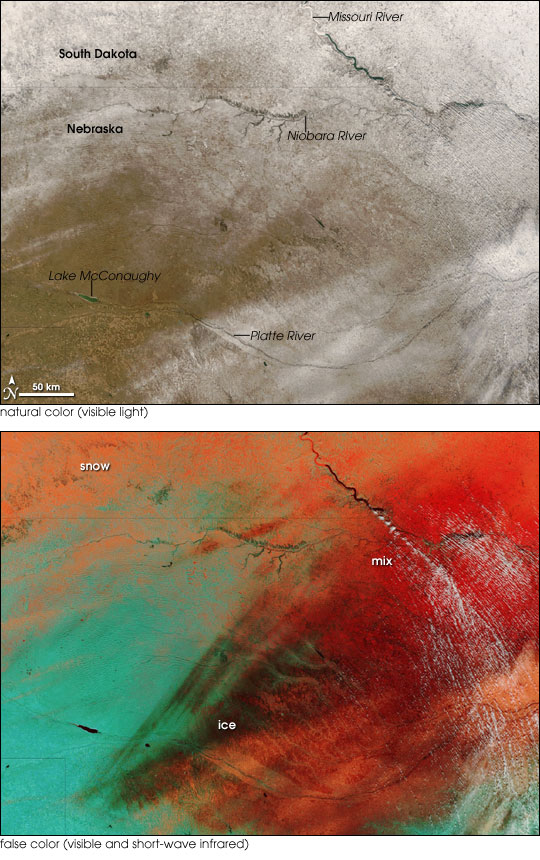 As if to pay homage to the start of meteorological winter (December-February), a wet winter storm plowed through the central and northern Great Plains over the first weekend of December 2007. After dumping two feet of snow in western Colorado, the storm moved eastward, blanketing states in the northern plains with snow and slathering those farther south with ice.

On Sunday, December 2, the skies over the Upper Midwest cleared, and the Moderate Resolution Imaging Spectroradiometer (MODIS) on NASA’s Terra satellite captured a view of what the storm left on the ground. The top image of the pair is similar to a digital photo, and it shows broad, white swaths of snow lying over North and South Dakota. In Nebraska, a streak of snow is bordered to the northwest by what appears to be a bare, winter-tan landscape.

However, this seemingly bare ground is actually clear-coated with ice, which becomes obvious in the bottom image, which includes MODIS’observations of short-wave infrared light reflected from the surface. In this type of image, the snow appears orange-red, bare ground appear blue-green, and liquid water in unfrozen lakes and rivers is nearly black. The clear coat of ice across the landscape, which was probably already turning slushy by Sunday afternoon when this image was captured, has a unique “signature” that is somewhere between liquid water, bare ground, and snow: it appears dark red. In places, the ice appears to be dusted or mixed with snow.

Satellite images made from light that isn’t normally visible to the naked eye can help reveal other features that can be hard to see in photo-like images, including standing flood water and burned areas. At high latitudes, a satellite’s capability for seeing more than just visible light is especially useful for interpreting whether a patch of white in an image is snow or clouds.