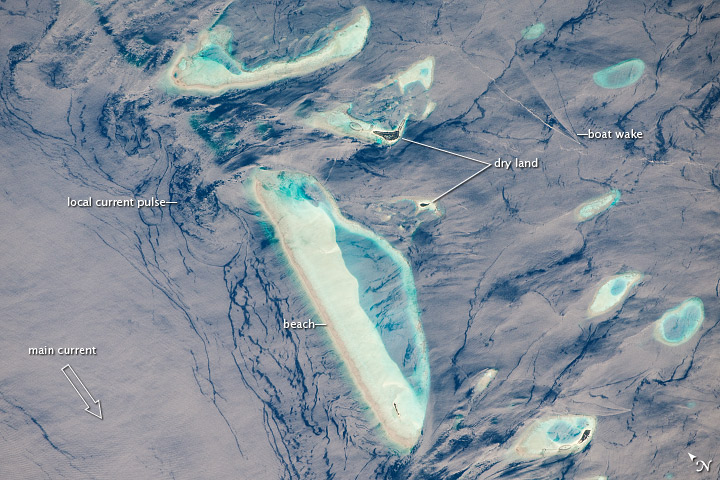 This detailed astronaut photograph features one of the numerous atolls in the Maldive Islands chain. The Maldives are an island nation comprised of twenty-six atolls that stretch in a north-south chain for almost 900 kilometers (560 miles) southwest of India. The silvery, almost pink sheen on the normally blue water of the equatorial Indian Ocean in the image is the result of sunglint. Sunglint occurs when sunlight is reflected off of water surface like a mirror, directly back towards the observer—in this case an astronaut on the International Space Station. Full sunglint in images typically results in bright silver to white coloration of the water surface. Sunglint images can have different hues depending on the roughness of the water surface and atmospheric conditions.

Sunglint images can reveal numerous details of water circulation that are otherwise invisible. This image was taken during the Indian Ocean northeast monsoon season. Predominant winds in this area create sinuous surface water patterns on the leeward side of and between the islets (image right). A south-flowing current flows in the deeper water through the Maldives most of the year (image left), with fan-shaped surface currents formed by local tides pulsing in and out of the shallow water near the islands (image top and bottom).

The largest island seen here (image center) is 6 kilometers (4 miles) long, and it is one of the outer ring of larger islands that make up the 70-kilometer- (40-mile-) long, oval-shaped Malé Atoll. Shores facing deeper water have well-defined beaches. Numerous small, elliptical coral reef islets are protected within the ring of shallow water to the northeast (image right). These islets are mostly awash at high tide, with dry ground appearing in tiny patches only. A small boat was navigating between the islets at the time the image was taken, as indicated by its v-shaped wake at image top right. Images like these illustrate why the Republic of Maldives, surrounded by water, is one of the most outspoken countries in stressing the dangers of rising sea levels.

Astronaut photograph ISS022-E-24557 was acquired on January 12, 2010, with a Nikon D3 digital camera fitted with an 800 mm lens, and is provided by the ISS Crew Earth Observations experiment and Image Science & Analysis Laboratory, Johnson Space Center. The image was taken by the Expedition 22 crew. The image in this article has been cropped and enhanced to improve contrast. Lens artifacts have been removed. The International Space Station Program supports the laboratory as part of the ISS National Lab to help astronauts take pictures of Earth that will be of the greatest value to scientists and the public, and to make those images freely available on the Internet. Additional images taken by astronauts and cosmonauts can be viewed at the NASA/JSC Gateway to Astronaut Photography of Earth. Caption by M. Justin Wilkinson and M. Trenchard, NASA-JSC.