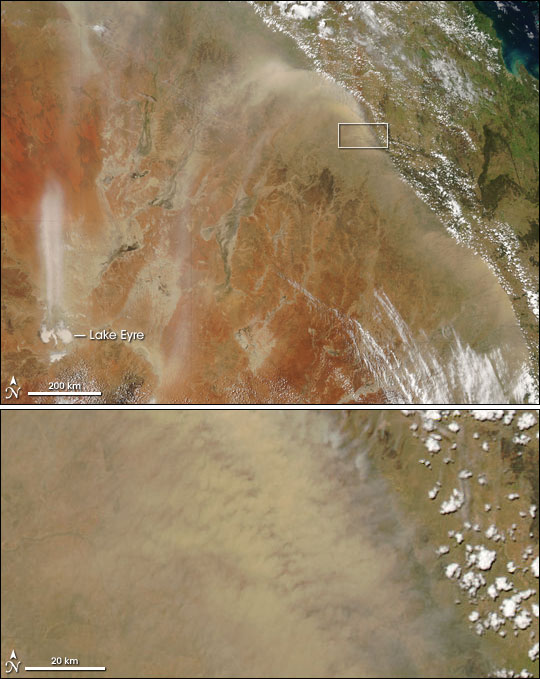 Unusual weather struck eastern Australia in the first days of February 2005, with snow, hail, lighting, high winds, and dust storms making it seem more like winter than summer in this part of the Southern Hemisphere. In the Australian Alps, which cluster in the southeastern corner of the continent, winds whipped through the town of Thredbo Village at 130 kilometers per hour (80.8 mph), according to news reports. Other mountain locations received 15-20 centimeters of snow (about 6-8 inches). Other locations experienced flooding and flying debris.

The turbulent weather included a massive dust storm that moved across the country as a huge wall of dust and sand. In this image from the Moderate Resolution Imaging Spectroradiometer (MODIS) on NASA’s Aqua satellite, the dust cloud stretches across eastern Australia like a breaking wave. The sharp boundary between the dust and the small, patchy clouds along the coast is the boundary between two different air masses.

The edge of the dust marks the edge of a “trough” of low pressure that moved across the country. A trough is an elongated area of low atmospheric pressure. Air from higher-pressure regions rushes into the trough. Although these atmospheric happenings are not always occurring right at the surface, if the air mass filling the trough has enough momentum, the surface winds can pick up enough of that momentum to stir up dust storms like the one seen in this image from February 2, 2005.